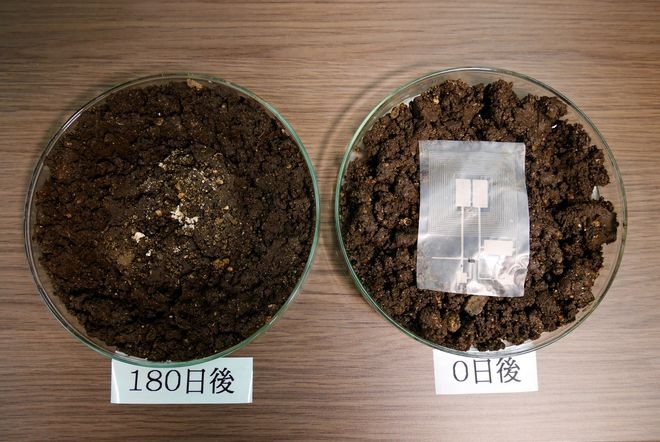 A device made of nanopaper, left, has nearly fully been dissolved by microorganisms in the soil in 180 days. (Akemi Kanda)

OSAKA--Scientists here have created a biodegradable paper-thin sensor device that connects to the internet of things (IoT) system to transmit data.

The nanopaper sensor device, which the researchers developed to collect data without damaging nature, is a potentially large leap toward production of environmentally friendly electronics.

The square, 1-millimeter-thick nanopaper sheets are used as substrates and can be left to naturally decompose in soil. They are the brainchild of scientists at the Institute of Scientific and Industrial Research (ISIR) of Osaka University.

The devices are expected to be adopted for data collection without harming the environment in places where instruments would be difficult to recover.

The substrate and some other components of the devices are made of nanopaper comprised of extremely thin fibers, allowing the device to be decomposed by microorganisms in the soil.

Commonly used substrates in electric appliances are non-degradable plastic, which are harmful to the environment if they are not recovered after use.

Takaaki Kasuga, a doctoral course researcher at the ISIR, and his colleagues created a hygrometer, which measures humidity in farm soil, by placing a coil, transistor and other parts on the nanopaper substrate.

The hygrometer can wirelessly relay data to farmers in distant places to let them know when to sprinkle water, the scientists said.

The biodegradable nanopaper fibers is one-1,000th as thin as fibers in regular pulp paper. The sheet's surface is smooth, resembling plastic, making it a good substitute for the material.

In about 40 days, 95 percent of the total volume of the device had decomposed into the soil, the researchers said. Its metal parts also rusted.

The ISIR team is considering using the nanopaper sensor to develop a gas detector, which would make it possible to gather data at the mouth of a volcano and other difficult-to-access areas without damaging the environment since the device would not need to be recovered.

Kasuga said one challenge the team faces in working with the new technology is “how to fine-tune the time it takes for the equipment to decompose.”