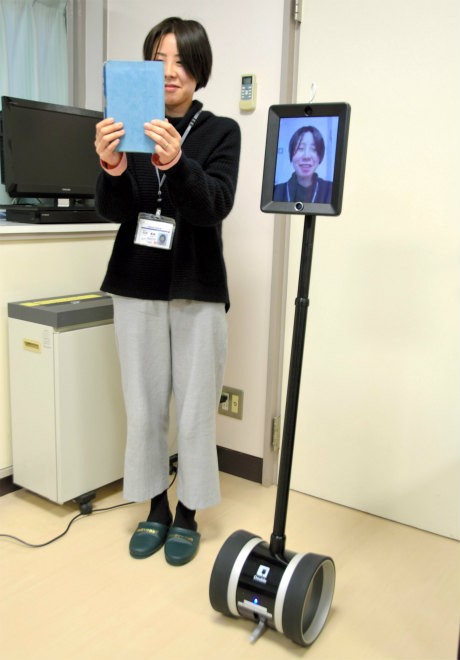 A woman operates an alter-ego robot via a tablet terminal at Niigata Prefectural Kashiwazaki special-needs school on Feb. 5. The robot is expected to take part in the summer’s Paralympic flame-lighting festival, assisting sick children. (Koji Atsumi)

A collection of more than 700 flames with symbolic meanings from across Japan will be brought together to light the torch that will burn brightly for the 2020 Tokyo Paralympic Games.

They will include the “Flame of Peace,” which has been kept burning at the Hiroshima Peace Memorial Park for the victims of the atomic bomb, and an eternal flame in Kobe memorializing the 1995 Great Hanshin Earthquake victims.

Organizers on Feb. 6 released a detailed plan for torch-related festivities, marking the 200-day countdown to the quadrennial sports event.

According to the plan, the Paralympic flame-lighting festival will be held in more than 700 municipalities between Aug. 13 and Aug. 21.

Torch relays will be held in Tokyo and Shizuoka, Chiba and Saitama prefectures. Each will also host Paralympic events.

The flames from each participating prefecture will be brought together in Tokyo on Aug. 21 for the lighting of the official Paralympic flame.

In Kanagawa Prefecture, all 33 municipalities will participate in the flame lighting.

Each flame will be brought together in Yokohama, where participants will say the chant, “We will remove every wall that discourages people with disabilities from social participation and eradicate all forms of prejudice and discrimination.”

The statement is a passage from the “Kanagawa Charter for an Inclusive Society,” which was drafted by the prefectural government about three months after a deadly stabbing rampage at a care facility for people with disabilities in July 2016.

At Tsukui Yamayurien in Sagamihara in the prefecture, 19 residents were killed by the suspect, a former care staffer, who has expressed hatred toward and a desire to eliminate the disabled.

“As we bring together flames, we also want to bind people together with a common goal, which is harmonious coexistence, and spread our movement,” said a prefectural government official.

Some municipalities are trying to make the flame-lighting process accessible to all.

In Kashiwazaki, Niigata Prefecture, organizers will let sick children who have long been hospitalized light a flame from their hospital rooms, by operating an alter-ego robot by remote control.

Such children who belong to the prefectural Kashiwazaki special-needs school are expected to take part in a flame-lighting festival with the help of a self-propelled robot and a tablet terminal.

The school has used the robot in classes and other activities from about five years ago.

The robot is about 1-meter tall and equipped with electrical wheels so that it can move omnidirectionally. It can be operated remotely.

“I want as many children as possible to enjoy the flame-lighting festival,” said Hiroshi Yokoo, 59, the school principal.

In Kobe, which observed the 25th anniversary of the Great Hanshin Earthquake on Jan. 17, a Paralympic flame will be lit by the eternal “1.17 Light of Hope,” which has been kept burning in a park in the city center.

The eternal flame was lit up by pilot lights brought from around the nation as a symbol of repose of souls and hopes for reconstruction in 2000.

Shinichi Fujimoto, 35, who heads the nonprofit organization Hands that manages the eternal flame, said, “It gives us great joy to see the flames that carry the thoughts of our supporters will be lit all over the country.”

In Beppu, Oita Prefecture, flame-collecting and departure ceremonies will be held at Japan Sun Industries (JSI), a social welfare corporation that provides job assistance to people with disabilities.

JSI was founded by the late Yutaka Nakamura, who headed the Japanese team at the 1964 Tokyo Paralympics.

More than 500 people with disabilities currently work at eight companies that have been jointly funded by the JSI and major companies.

JSI has worked to realize a society in which people with disabilities can lead a self-reliant life and enjoy sports as well.

JSI Chairman Tatsuo Yamashita, 61, said, “Regional efforts are extremely important to expand an inclusive society, and we hope to send such a message from here.”

All participating municipalities have planned unique ways to light Paralympic flames that are tied to their regional histories and memories.

In Iwaizumi, Iwate Prefecture, for example, the flame will be lit by a combination of natural sunlight and a lens using water from the Ryusendo Cave, which is known as one of Japan’s three greatest limestone caves.

In Konan, Aichi Prefecture, an oven used to bake bread at a facility for the disabled will be used to light a Paralympic flame.

In Kagoshima Prefecture, flint for the arquebus of Tanegashima island will be used.