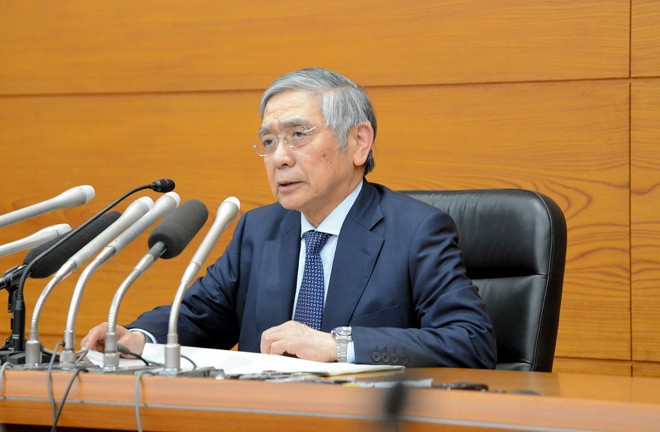 The Bank of Japan should conduct a comprehensive review of its policy objectives and re-define its elusive 2% inflation target as a long-term goal with room for some allowance, a staff report by the International Monetary Fund (IMF) said.

The move would make the price target more realistic and give the central bank flexibility to address the strain prolonged monetary easing is inflicting on financial institutions, according to the report released in Washington D.C. on Monday.

"The BOJ should clarify that it is not excessively focused on inflation, but that other objectives, including financial stability, also matter for monetary policy," it said.

Years of heavy money printing has failed to fire up inflation to the BOJ's 2% target, forcing it to maintain a radical stimulus despite the rising cost such as the hit to commercial banks' profits from ultra-low interest rates.

While the BOJ no longer sets a rigid timeframe for reaching the target, Governor Haruhiko Kuroda has shunned calls to water down his pledge to meet the price goal as early as possible.

The IMF staff said the large weight the BOJ puts on the inflation target and its "over-optimism" in meeting the goal have hurt its credibility as price growth remains anemic.

"The emphasis on achieving the price stability target 'as soon as possible,' together with unrealistic inflation forecasts, have been particularly problematic given limited policy space, a clogged monetary transmission, and rising financial stability costs," it said.

The BOJ should clarify that its price target will be achieved over the medium to long term, and introduce a range around the target, so that it can adjust policy if risks to Japan's banking system heighten, the report said.

The central bank could conduct a "comprehensive review" of its objectives to explain that such a tweak to its inflation target isn't a step toward whittling down stimulus, but aimed at making its policy framework more flexible, the report said.

"Finding the right balance between the price and financial stability objectives, and setting realistic conditions for achieving the inflation target, is key to improve policy credibility and better anchor long-run inflation expectations," it said.

Under a policy dubbed yield curve control, the BOJ guides short-term rates at -0.1% and 10-year bond yields around 0%. It also buys government bonds and risky assets to reflate growth.

The BOJ expects inflation to come in at 1.0% in the year beginning in April and accelerate to 1.4% the following year - forecasts criticized by private analysts as too ambitious.

The IMF's staff report was compiled after the global lender's Article 4 consultations with Japan.