Ceramic figurines of ballerinas, noblewomen and ladies manufactured about 70 years ago under U.S. occupation are found in a warehouse in Seto, Aichi Prefecture. (Noboru Tomura) 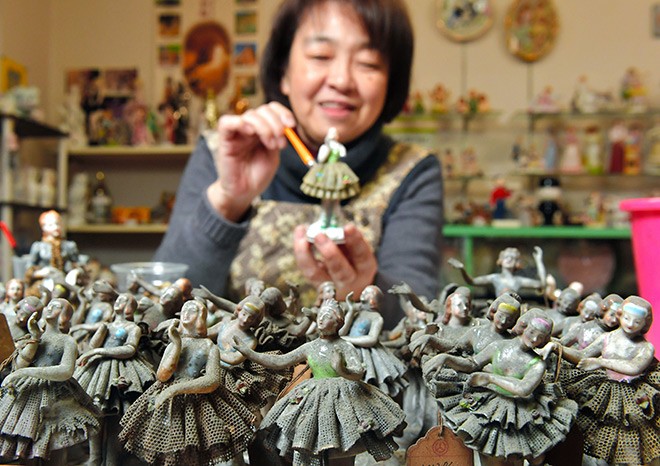 A woman cleans a ceramic figurine made about 70 years ago when Japan was under U.S. occupation. (Noboru Tomura)

SETO, Aichi Prefecture--Four wooden crates that lay in a warehouse here for decades yielded an unexpected trove of ceramic figurines manufactured when Japan was under U.S. occupation.

The boxes contained about 100 figurines marked with "Made in Occupied Japan" on the back of their base.

They were found in the warehouse of Maruyama Toki, a pioneer in churning out ceramic ornaments known as "Seto novelties," which went out of business around 30 years ago.

Members of a civic group called Seto Novelty Culture Preservation Society are working to remove dust and grime from the figurines with cleaning agents so they can be put on public display soon.

"(The discovery) could help fill in gaps in the history of Lace Dolls in Seto," said Yoshitomo Nakamura, who heads the group.

Standing 5 to 18 centimeters in height, the figurines came in three varieties: noblewoman, lady and ballerina. They are also marked "Marulace," the brand name of Maruyama Toki, on the base.

Most of the figurines retain their original form. Still, the lace parts of some were chipped or had come off, while others were snapped almost in half.

Production of ceramic figurines for export started in Seto before the war. The ornaments, referred to as Seto novelties, helped provide a foothold for postwar reconstruction.

According to research by the civic group, the figurines recently discovered were outfitted with lace cloth solidified with resin plastic because they were produced when materials and manpower were scarce.

The figurines, known as "Plastic Lace Dolls," differ from "Lace Dolls," a representative product of Seto novelties made entirely of ceramics, including the lace parts.

Plastic Lace Dolls were exported to the United States when Japan was under the thumb of the General Headquarters of the Allied Forces (GHQ) following its defeat in World War II.

At GHQ's insistence, exports from Japan were labeled "Made in Occupied Japan" between 1947 and 1952.

According to documents found at the ceramics manufacturer, a cooperative association for Plastic Lace Dolls set up in Seto in 1947 had eight member companies that produced ceramic figurines for about 15 years.

Some Plastic Lace Dolls have been brought back from the United States over the years, but it is exceptional for so many of them to be found where they were produced.

The figurines were stored by Yutaka Kato, the last president of Maruyama Toki, as a legacy for later generations.

The preservation society gained permission from Kato's wife, Yumiko, to examine them three years ago.

"The companies presumably used lace cloth for mass production in light of the shortage of materials and manpower after the war," said Fumitaka Hattori, director of the Seto City Art Museum. "The trove is a valuable find because many people don't know about Plastic Lace Dolls."