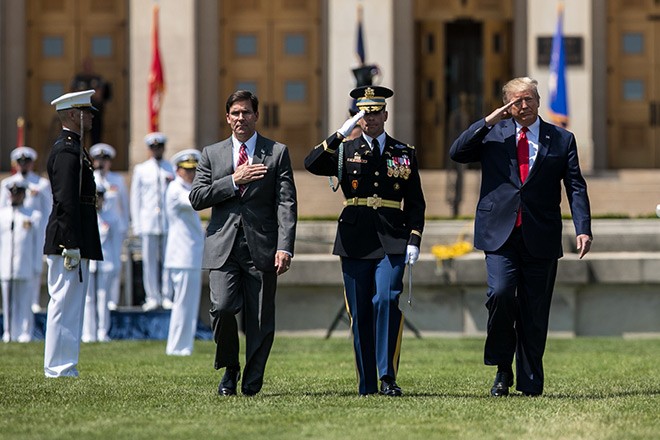 U.S. President Donald Trump with Mark Esper, second from left, his defense secretary, at the Pentagon in July 2019 (The Asahi Shimbun)

The world’s superpowers are trying to make the use of nuclear weapons easier, a grave folly that will increase the risk of an accidental nuclear war and endanger the entire world.

The United States has deployed a missile equipped with a newly developed small nuclear warhead aboard a submarine. It explained that the deployment is designed to deter Russia and other nations from using their small nuclear weapons.

U.S. defense experts have long pointed out the difficulty of using conventional nuclear weapons because of their excessive destructive power. They have argued in favor of smaller weapons to ensure successful retaliation against limited nuclear strikes that could occur in regional conflicts.

However, the very idea of “usable nuclear weapons” is nothing but a delusion. Such weapons will not only fail to bring strategic stability but could escalate the nuclear arms race.

In the first place, no nuclear attack should ever be condoned, irrespective of scale.

The new warhead deployed by the United States is said to have about one-third the destructive power of the atomic bomb dropped on Hiroshima. But its “smallness” is no justification for causing another nuclear havoc.

The nation that uses one cannot escape grave responsibility, not only under international humanitarian law.

It is also a mistake to believe in being able to control the scale of any armed conflict, for that matter. The situation can readily devolve from miscalculations and erroneous assumptions--all the more so if any weapon of mass destruction is deployed. There is no winner in a nuclear war.

This year marks the 75th anniversary of the atomic bombings of Hiroshima and Nagasaki.

The Treaty on the Non-Proliferation of Nuclear Weapons (NPT), which has served since the Cold War era as the “pillar” of global nuclear control, came into effect half a century ago.

In April and May, NPT signatory nations will meet for a quinquennial review conference to reaffirm their commitment to nuclear nonproliferation and disarmament.

Article 6 of the NPT requires all nuclear powers to advance nuclear disarmament in good faith. But this obligation appears to have been all but forgotten by the United States and Russia--the nuclear superpowers that together own the bulk of the global nuclear arsenal--as well as by China and other nations.

The superpowers' regressive move is not limited only to the deployment of smaller nuclear weapons.

The Intermediate-Range Nuclear Forces Treaty between the United States and the former Soviet Union, which banned land-based, intermediate-range missiles and led to the end of the Cold War, expired last summer.

The New Strategic Arms Reduction Treaty is expected to last until 2021, but the United States has not committed to its extension.

With the superpowers acting irresponsibly, North Korea has shown no indication of abandoning its nuclear program, and South Asia and the Middle East also face nuclear problems.

The international community must do something to change this global nuclear crisis.

Non-nuclear nations took the lead in bringing about the Treaty on the Prohibition of Nuclear Weapons, but Japan remains outside the treaty and has done little despite its claim as “the bridge” between nuclear and non-nuclear nations.

In this 75th anniversary year of the Hiroshima and Nagasaki atomic bombings, Japan must show its genuine resolve to seek a world without nuclear weapons.

Tokyo must urge Washington to understand the necessity of rebuilding the nuclear non-proliferation framework and extending the New Strategic Arms Reduction Treaty beyond next year.