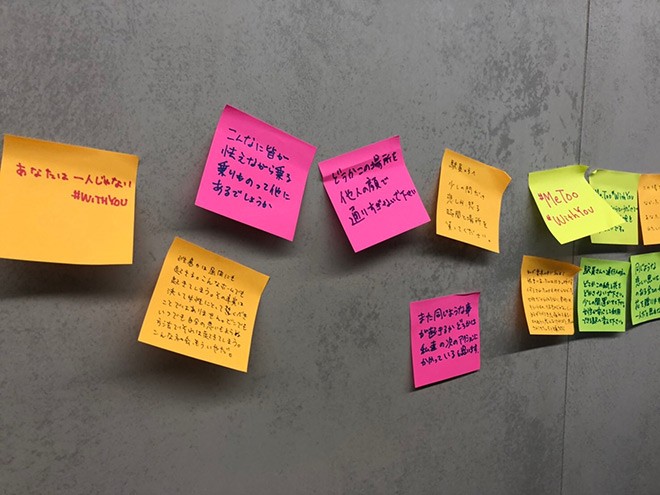 Sticky notes on a platform at Nakatsu Station on Osaka Metro Co.’s Midosuji Line express grief and anger over a suspected rape there. (Provided by a reader)

OSAKA--Outraged over another rape case, protesters at the Flower Demonstration held here on Feb. 11 again called for an end to sexual assaults and questionable court rulings that let suspects off the hook.

The 60 or so demonstrators at the Osaka City Central Public Hall in Kita Ward vented their anger over the suspected rape of a woman on the platform of Nakatsu Station on Osaka Metro Co.’s Midosuji Line last month.

A man has been arrested on suspicion of forced sexual intercourse in the case.

At the beginning of the Flower Demonstration, a woman said she visited the platform because she was unable to stand still after hearing about the incident.

Other women spoke out about being victims of sexual abuse from family members, sexual harassment at work and groping on trains.

The Flower Demonstration started in Tokyo in April 2019 after a number of rulings acquitted rape suspects through loopholes and other legal definitions in the law.

The demonstrations have since been held regularly on the 11th day of every month in Osaka and other places.

Rallies will be held in each of Japan’s 47 prefectures on March 8, International Women’s Day. Organizers indicated these demonstrations would be the last ones.

A women’s group seeking an end to sexual violence held a meeting in Osaka on Feb. 11 to discuss the incident at Nakatsu Station.

The group was founded in 1988 after the “Midosuji incident,” in which a woman who had confronted gropers on a train on the line ended up being raped outside by them.

The group has continued asking railway companies to take preventive measures against groping.

A member of the group since its founding said at the meeting: “Another incident occurred on the Midosuji Line. I am still in pain 30 years after the Midosuji incident.”

She said the group will consider how to respond to the latest case.

Sticky notes had been placed on the platform at Nakatsu Station with such messages as: “Is there any other vehicle we board with such fear?” and “We should never ignore the incidents that happened here.”

The notes were placed in hopes of drawing attention to the scourge and urging the railway operator to take measures.

However, the notes were reportedly immediately removed.

In response to the incident, Osaka Metro early this month started an anti-groping campaign by handing out fliers. The company plans to increase the number of security cameras on the line and heighten patrols.