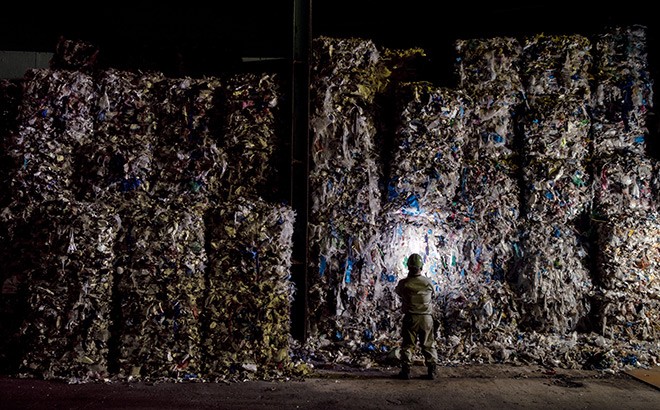 Tokyo municipalities that refrain from burning plastic waste and recycle it instead will get subsidies from the capital's metropolitan government starting in April.

As part of its strategy to combat global warming, Tokyo included about 100 million yen ($910,550) in its fiscal 2020 budget to encourage municipalities to collect all plastic containers and packaging separately from other waste.

“Measures against global warming can’t wait any longer,” said a senior government official. “We want to raise awareness of environmental issues all across Tokyo.”

The Tokyo metropolitan government at the end of last year unveiled its Zero Emission Tokyo plan to eliminate carbon dioxide emissions by 2050.

Tokyo officials see sorted collection of plastic containers and packaging as the key to achieving a net zero emissions target.

Containers and packaging for products including shampoos, detergents and yogurt as well as labels of plastic bottles have markings that identify them as made from plastic.

But in Tokyo, the amount of plastic waste disposed of differs widely from municipality to municipality.

As of the end of fiscal 2017, in Tokyo’s Tama area, municipalities separately collected an annual average of 8.30 kilograms per resident, while the figure for Tokyo’s 23 wards was 2.65 kg, the metropolitan government said.

The government said the gap is due largely to the fact that though most cities, towns and villages in Tokyo have shifted to sorted plastic waste collection, 11 wards including Setagaya and Ota collect only certain kinds of plastic waste, such as trays and Styrofoam products.

The Tokyo metropolitan government included 120 million yen in its budget plan for fiscal 2020 to address the issue.

Municipalities that are yet to collect plastic waste separately and those that are doing so will both be eligible for subsidies.

They will receive funds to select new routes for collecting plastic waste and to locate intermediate disposal facilities to bring themselves into compliance with the containers and packaging recycle law.

Tokyo will also support moves by municipalities that have already shifted to sorted plastic collection to boost the efficiency of garbage collection.

The government said it is also considering shouldering the cost of collecting all the plastic waste separately spent by municipalities that will start doing so.

Among targets the Tokyo metropolitan government aims to achieve by 2030 is to burn 40 percent less plastic waste from households and large office buildings than it did in fiscal 2017.