EDITORIAL: Abe’s heckling makes a mockery of Diet as ‘citadel of discourse’ 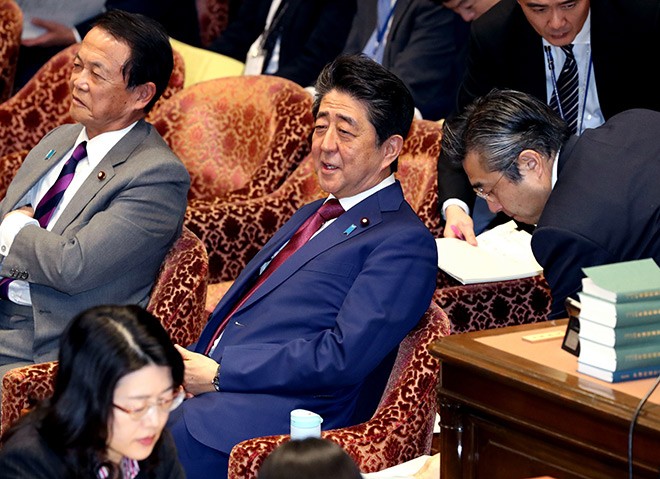 It is distressing to see bleak, hopeless scenes unfolding in the Diet. While Prime Minister Shinzo Abe has made arrogant, huffy retorts and heckled an opposition questioner, a Cabinet member has continued giving confused answers in a faltering manner.

The state of the Diet is a far cry from what it is supposed to be: a bastion of the democratic process for reaching better policy decisions through constructive debate.

The Lower House Budget Committee held an intensive session on Feb. 12 to discuss topics concerning both domestic and international policy issues. It was the ninth day of Budget Committee meetings attended by the prime minister in the current ordinary Diet session.

This is a big change from last year’s extraordinary session, when Abe made all-out efforts to avoid engaging in debate with opposition lawmakers. But his disregard of the importance of the legislature’s function remains as blatant as ever.

This was eloquently demonstrated by his jeering of Kiyomi Tsujimoto, a lawmaker of the Constitutional Democratic Party of Japan. While remaining seated, Abe said, “You are asking meaningless questions.”

She ended by saying, “It is said that a sea bream rots from the head. When the upper ranks become corrupt, the rest also becomes corrupt.”

Abe’s heckling came immediately after Tsujimoto made these remarks.

Admitting his heckling, Abe said the opposition lawmaker had heaped “abuse” on him and that he was not given an opportunity to respond.

“Such exchanges are meaningless,” he asserted. “I think so, naturally,” he added, speaking matter-of-factly.

Abe showed no sign of being a man of high caliber who can accept criticism against him or having the political aplomb to respond to such criticism with logical and convincing answers.

Abe has failed to offer straightforward answers to opposition questions about the allegations that he abused the annual cherry blossom viewing party for his personal gain. Instead, he has given forced explanations and parried questions.

As for his remarks last week that described opposition questions as groundless lies, Abe refused to apologize, pointing out that he had already withdrawn the comments. To top it all off, he said, “I have no intention of engaging in lengthy conversations that are not constructive and have nothing to do with policy issues.”

But opposition parties keep asking questions about the issue because Abe has refused to provide documents and other materials to support his claims and make a fresh investigation into key information including the list of guests invited to the event, which the government says has been destroyed.

If he is trying to create the impression that the opposition parties are obsessed with attacking the administration over the allegations while the new coronavirus is spreading with potentially serious social and economic implications, Abe is playing a petty political game.

While the government’s disregard for its accountability to the legislature is preventing debate on the Diet floor from producing satisfying moments, Yasufumi Tanahashi, a lawmaker of the ruling Liberal Democratic Party who serves as head of the Lower House Budget Committee, is failing to play his role as a neutral promoter of meaningful debate.

This is another factor behind the dismal performance of the Diet.

Tanahashi’s chairmanship has been biased toward helping the government, as indicated by his repeated act of calling on other ministers to answer when the questioner demands a response from the prime minister. When Abe’s heckling of Tsujimoto caused a commotion on Feb. 12, Tanahashi tried to forcibly continue the proceedings.

Abe’s heckling, which called an opposition lawmaker’s criticism of him “meaningless” without giving any convincing argument to support his claim, is a sacrilege against the legislature, which is responsible for monitoring the administrative branch’s actions.

Even though Tanahashi is a member of the LDP, that should be no excuse for his failure to fulfill his responsibility to ensure productive debate that befits the citadel of discourse.