Lisa’s In and Around Tokyo: Delightfully kitsch Atami Castle lets you slip back to 1960s 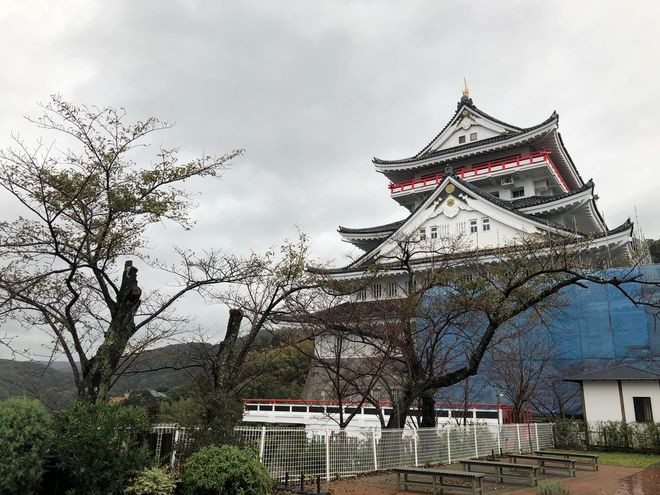 Atami Castle offers a beautiful view of Atami city and Izu Peninsula from its observatory in the castle tower 43 meters above the ground. It is considered one of the best places in the region for cherry blossom viewing. (Photo by Lisa Vogt)

Atami, meaning "hot sea," got its name from the boiling water gushing out from the ocean floor. It’s a hot spring town caught in a time warp.

Back in the 1960s, it was a major company trip destination. In my country, we don’t do “shain-ryoko” like the Japanese. There are corporate team-building events and outings, but such trips take place on weekdays and are educational and work-like. Co-workers don’t party to the point of inebriation and let it all hang out like I’ve sometimes seen in Japan.

Atami Castle was built in 1959. Not rebuilt, mind you, as Atami never had a real castle. The new-masquerading-as-old castle is perched above Nishikigaura and has panoramic views of Sagami Bay and beyond. It was built of concrete as a tourist attraction just as Atami was budding as the go-to R & R destination for Tokyoites.

The castle, for the most part, is a concoction of kitsch yesteryear attractions and shops, but I found it absolutely delightful! Upon entering it, visitors are greeted by a huge golden fish that looks like it may have some dragon DNA mixed in with it. It makes for a good snapshot.

I started my exploration on the sixth floor, where visitors can enjoy the view, and then worked my way down. On the fifth floor, visitors can help themselves to kimono and ham it up to take photos, and on the fourth floor are pictorial puzzles that were popular in the Edo Period (1603-1867).

The highlight was the analog and dated, yet excellent, Japanese Castle Museum on the second floor. Miniature castles painstakingly made by hand from matchsticks dot the exhibition hall. Names and photographs of castles from around the country are pinned to the hand-painted maps of Japan, and visitors can learn about the various architectural styles of Japanese castles.

The structure is one of Atami’s numerous relics of a bygone era, and its lack of sophistication, is precisely what makes the frozen-in-time Atami Castle so enthralling.

Most of Atami is still old-school Japan, and by capitalizing on this, I see a revival in the works.

This article by Lisa Vogt, a Washington-born and Tokyo-based photographer, originally appeared in the Feb. 16 issue of Asahi Weekly. It is part of the series "Lisa’s In and Around Tokyo," which depicts the capital and its surroundings through the perspective of the author, a professor at Meiji University.