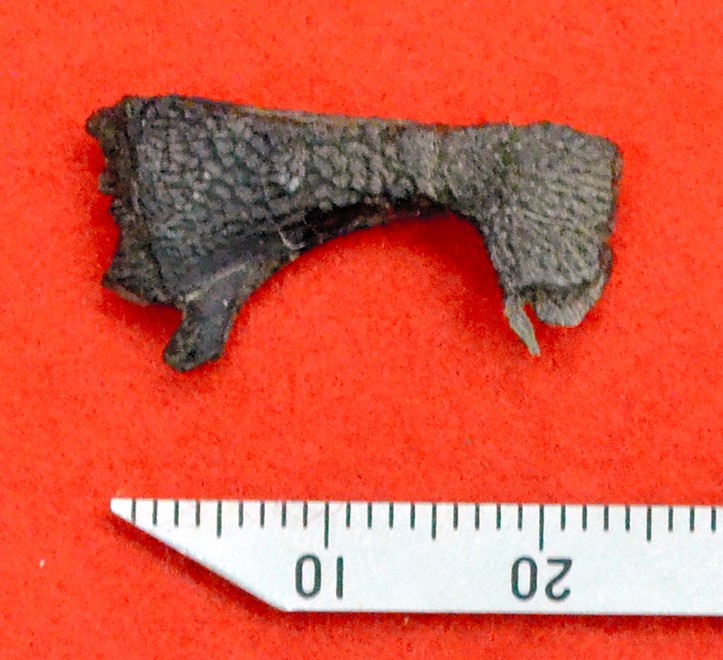 FUKUI--Japan’s oldest fossils of a pitted-shelled turtle species are now on display, providing clues on how prehistoric creatures expanded their range 130 million years ago.

The two shell fragments are being shown to the public through March 1 at the Tokushima Prefectural Museum.

The discoveries came during a joint excavation survey that the two museums started in 2016.

Although the two fossils were found close to each other, it is not known if they came from the same turtle.

The fossils in Tokushima Prefecture are expected to provide important clues on the origin and initial evolution process of the species.

“The specimens are significant in identifying how land reptiles, such as dinosaurs, expanded their habitats,” said Teppei Sonoda, a researcher at the Fukui Prefectural Dinosaur Museum.

Researchers used the size of the fossilized parts to estimate that the turtle shells were both around 9 centimeters long.

The shell’s uniquely curved section led to confirmation that the fossilized animal was a pitted-shelled turtle, according to museum officials.

Japan’s previously oldest pitted-shelled turtle fossil was discovered from a geological layer dating back 120 million years in Katsuyama, Fukui Prefecture, which is at a higher north latitude than Tokushima Prefecture.

“Based on the fossils found to date, we may hypothesize that pitted-shelled turtles (from southern waters) had not reached the Hokuriku region 130 million years ago but might have moved northward (over the next 10 million years) due to global warming and other reasons,” Sonoda said.

The world’s oldest fossil of the species was spotted in Thailand in a stratum formed 135 million years ago.

Only one pitted-shelled turtle can now be found in northern Australia and some parts of New Guinea, and it is on the brink of extinction.