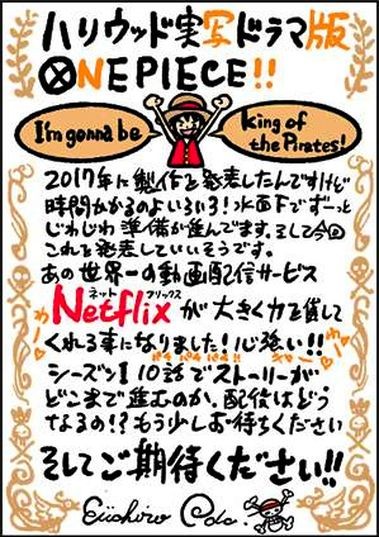 "One Piece" creator Eiichiro Oda's statement released in time with the announcement of the production of a live-action adaptation series by Netflix (Provided by Netflix Inc.)

SAN FRANCISCO--Netflix Inc. is adapting Japan's iconic pirate adventure manga "One Piece" into a 10-episode live-action series that will stream on its platform.

The leading U.S. video streaming service provider is teaming up with Hollywood studio Tomorrow Studios for the project, with the manga's creator, Eiichiro Oda, joining as executive producer.

Netflix has yet to reveal the full details about the project, including when "One Piece" will start streaming.

The manga became wildly popular after it started its run in Shueisha Inc.'s Weekly Shonen Jump comic anthology in 1997. The title boasts more than 460 million copies in print worldwide, according to the publisher.

Netflix had at least 167.09 million paid subscriptions around the world as of the end of December 2019 and has recently seen massive growth in subscribers outside the United States.

To cater to its expanding global audience, Netflix has been making efforts to produce locally created content, such as "The Naked Director," which caused a stir in Japan last year.

By adapting the popular Japanese manga into a live-action series in Hollywood, the "One Piece" project appears to be aimed at widening Netflix's appeal not just in Japan and other Asian markets but also in the United States and elsewhere.