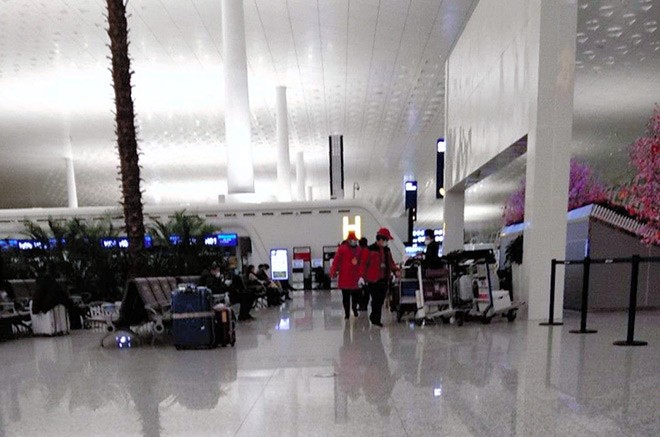 The departure lobby for a chartered flight to Japan at an airport in Wuhan on the evening of Feb. 16 (Provided by a man in Wuhan)

BEIJING--With his pregnant wife due to give birth soon, a Japanese man had to decide on returning with her to Japan on his government's last chartered flight out of Wuhan.

“Stay or leave, it's full of difficulties," the man said, before boarding the aircraft in Wuhan, the epicenter of the deadly COVID-19 outbreak. "The real challenge is yet to come.”

The man and his family were among the 65 people who returned to Japan on the flight on Feb. 17.

A government official said many of the returnees were forced to make an agonizing choice between work and family issues before returning.

For the Japanese citizen in his 30s, who owns a business in Wuhan, the decision also was not easy.

But after much agonizing, he headed to an airport in Wuhan on the afternoon of Feb. 16 with his wife, who is in her 30s, and their 3-year-old son--both Chinese nationals.

His relative gave them a lift to the airport.

Strict restrictions on movement have been imposed in Hubei province where Wuhan is located since Jan. 23, leaving the city basically sealed off.

At the end of January when the Japanese government began arranging chartered flights for Japanese expats in Wuhan to return home, the man sought to take the opportunity with his family.

Then he heard that only Japanese nationals would be allowed and the government might not allow Chinese family members to board the aircraft.

The man withdrew his request to take a chartered flight, thinking, “I cannot go back and leave my family here.”

The Japanese government continued negotiating with its Chinese counterpart to allow Chinese nationals who are spouses and children of Japanese citizens to come to Japan.

Finally, on the government’s fourth chartered flight that took off from Wuhan on Feb. 7, Chinese spouses and children were given permission to board.

Still, the man couldn’t make up his mind.

His wife was eight months pregnant. Originally, the family was planning to have her give birth in Japan where the medical system is better than in China.

He was planning to obtain a residence permit for his wife and son and return to Japan on Feb. 10.

However, even if they were allowed on a chartered flight, he was unsure how long his wife and child could stay in Japan without the permit.

If they ended up returning to China for the childbirth, the burden on his wife and their baby would be even greater.

Her due date was approaching.

Since the province was under a lockdown, his wife was worried about becoming infected with the coronavirus and could not even go to the hospital for a regular checkup.

In the meantime, the number of infected in the province increased day by day.

“Let’s just return to Japan,” the man decided on Feb. 11, filing a request with the government again.

However, the decision didn’t bring him peace of mind. The returnees are expected to be quarantined for 14 days in Japan.

His concerns included if his wife would remain healthy during the quarantine period; if there would be a hospital to take her in; and if the family would suffer mistreatment or discrimination because they came from Wuhan.

So far, the government has arranged for five chartered flights that have brought back a total of 828 people to Japan.

Doctors and quarantine officers were expected to conduct examinations on the 65 passengers inside the aircraft on the fifth chartered flight. The passengers will then be transported to government-arranged accommodations in Tokyo and other areas where they will stay during the quarantine period.

The government doesn't plan at the moment to send another chartered flight to China to bring Japanese citizens and others to Japan.