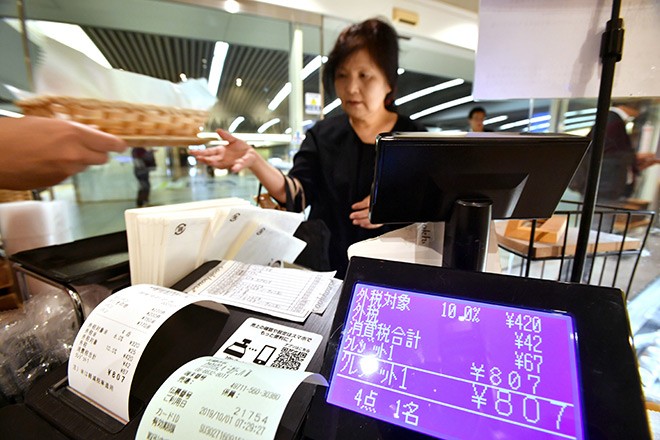 A monitor at the checkout of a store in Osaka displays the 10 percent consumption tax rate on Oct. 1, 2019. (Asahi Shimbun file photo)

Japan’s economy shrank in the October-December period for the first time in five quarters, as the sales tax hike and natural disasters pummeled personal consumption, according to preliminary figures released on Feb. 17.

Gross domestic product declined by a seasonally adjusted 1.6 percent in the quarter from the previous three months, or an annualized 6.3 percent, the Cabinet Office figures showed.

The contraction of 6.3 percent was far worse than expectations of many private-sector economists, who predicted a shrinkage of 4 percent or so.

More bad news could be in store for the economy, with the new coronavirus outbreak now hammering tourism numbers and disrupting business operations.

Personal consumption, which accounts for more than half of Japan’s GDP, grew by 0.5 percent in the July-September period.

But the figure plunged to minus 2.9 percent for the three months from October, when the government raised the consumption tax rate to 10 percent from 8 percent.

Consumers tightened their purse strings after the tax hike, offsetting a surge in sales of electric appliances and other products in last-minute buying ahead of higher levy, the Cabinet Office said.

Destructive typhoons that hit eastern Japan and the warmer winter also fueled the slowdown in personal spending, such as purchases of winter clothes.

Other economic indicators slumped in the quarter.

Investment in equipment by businesses, for example, shrank by 3.7 percent, a sharp decline from a rise of 0.5 percent in the preceding quarter, while housing investment tumbled 3.7 percent from an increase of 1.2 percent.

New housing starts have also been waning since the tax hike.

Many companies’ business performances are deteriorating, particularly in the manufacturing sector.

In contrast, external demand pushed up GDP by 0.5 percentage point.

While exports declined by 0.1 percent largely from poor auto sales in the U.S. and EU markets, imports were down further, to minus 2.6 percent, underlining weak domestic demand.

As a result, overall external demand was in positive territory.

The nominal GDP rate in the October-December period was minus 1.2 percent, or an annualized minus 4.9 percent.

The economic figures for the October-December period were the focus of attention of government officials and economists because it was the first quarter to take in the effects of the consumption tax rate hike.

The slowdown was not as sharp as the one in the quarter when the consumption tax rate was increased from 5 percent to 8 percent in April 2014. The annualized growth rate in the April-June period of 2014 was minus 7.4 percent.

But the figure for the last quarter of 2019 was worse than the annualized rate of minus 5.5 percent posted in the January-March period of 2011, when the Great East Japan Earthquake, tsunami and Fukushima nuclear disaster hit northeastern Japan.

The government has introduced an array of measures to mitigate the negative impact of the latest consumption tax hike, such as keeping the tax rate for essential food items at 8 percent and introducing a point return system for cashless payments through June.

Yasutoshi Nishimura, minister in charge of economic revitalization, gave a positive outlook for personal consumption in a statement released on Feb. 17.

“The margin of decline in personal consumption is likely to shrink,” he said.

But Japan could find itself in an uphill battle to avoid a recession.

The spread of pneumonia caused by the new coronavirus originating in China since last month has led to a sharp decline in the number of Chinese tourists visiting Japan.

The epidemic has also forced Japanese manufacturers to temporarily suspend operations in major Chinese cites affected by the spread of the virus. Supply chains of components made in China and needed by Japanese companies have been disrupted.

At this stage, it is difficult to gauge the ramifications of the outbreak on Japan’s economy, many experts say.

But some economists are already warning that GDP could shrink again in the January-March quarter of this year, citing an estimate that the impact of the epidemic will further push down GDP by 0.46 percentage point on an annualized basis.