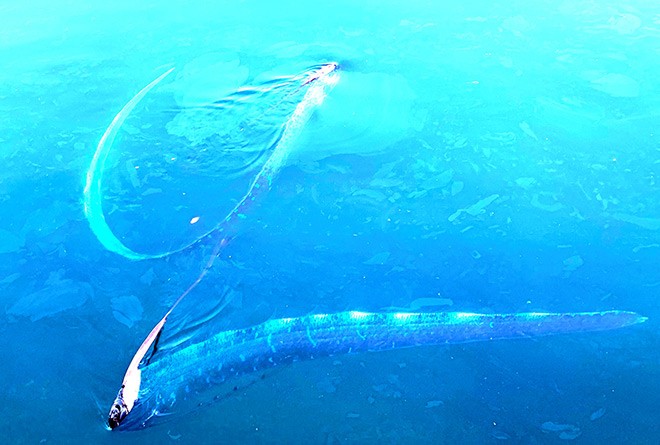 Two oarfish swim closely together at a fishing port in Echizen, Fukui Prefecture. (Provided by Koji and Kotome Tabira)

ECHIZEN, Fukui Prefecture--Few people ever get a glimpse of the mysterious oarfish in the wild, the longest bony fish to inhabit deep waters.

But by capturing footage of two of the creatures on Feb. 15 in waters near this coastal town, a visiting couple may have recorded a world first.

Japanese legend has it that the oarfish, which can grow up to 10 meters long, is a messenger from the sea god's palace that can herald either a great catch or an earthquake.

The fish dwell at least 200 meters below the water's surface.

Koji Tabira and his wife, Kotome, both 28, who were visiting from Kasugai, Aichi Prefecture, to fish, shot video and photos of the 5-meter-long fish, which they passed on to the Echizen Matsushima Aquarium in Sakai, Fukui Prefecture.

An aquarium official praised the couple for their contribution.

“It's an extremely rare and precious video, and it could be the first anywhere in the world recording two of the fish swimming closely together,” the official said.

The Tabiras said they saw the two creatures near breakwaters around 3:30 p.m. on Feb. 15 and filmed them with their smartphones.

The couple said they were captivated by the vivid blue colors of the fish, which they said they lost sight of after about 5:30 p.m.