EDITORIAL: Credibility of Abe’s words still in doubt even after his apology 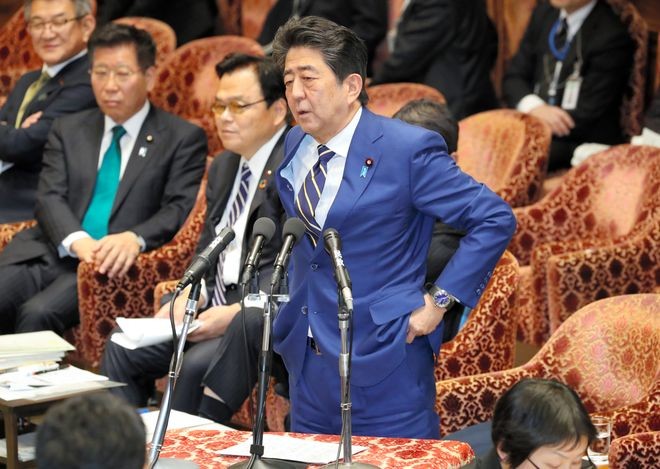 Prime Minister Shinzo Abe’s apology for belittling an opposition lawmaker during a recent Diet session has done little to rectify his disturbing disregard of the importance of the legislature and his hostile stance toward opposition parties.

At the outset of the Feb. 17 Lower House Budget Committee session, Abe apologized for heckling Kiyomi Tsujimoto, a lawmaker of the Constitutional Democratic Party of Japan, during a session of the committee last week saying, “You are asking meaningless questions.”

“I apologize for my irregular remarks,” Abe said. “I will discipline myself as prime minister and refrain from making such remarks” from his ministerial seat.

Immediately after his impudent remarks, however, Abe looked unrepentant and defiant, saying he “naturally” thought her questions were indeed “meaningless” since the opposition lawmaker had heaped “abuse” on him.

Abe has switched to an apologetic stance probably because he wants to prevent this disruption from affecting Diet debate on the government’s draft budget for fiscal 2020, which starts in April. Abe is intent on ensuring the passage of the spending plan by the end of March.

Abe has repeatedly succumbed to a compulsion to heckle opposition legislators criticizing him, provoking criticism from various quarters.

Five years ago, during Diet deliberations on new national security legislation, Abe heckled Tsujimoto, saying, “Ask the question already.” During an extraordinary Diet session last year, Abe interrupted an opposition lawmaker’s question about who had authored a document that implicated a senior administration official’s involvement in the political scandal involving Kake Educational Institution by saying, “That is you, isn’t it?”

Although he apologized in both cases, Abe’s apologies deserve to be regarded as specious given that he has continued repeating such acts.

Heckling in Diet sessions is nothing new. But it should be a no-no for ministers to heckle Diet members questioning them. That is because Cabinet members are accountable to the legislature for their policies and actions.

Is Abe, as the leader of a nation, not ashamed of his behavior?

During the Feb. 17 Lower House Budget Committee session, Tsujimoto also disclosed new facts that raise fresh doubt on the credibility of Abe’s remarks concerning allegations against him and his administration regarding the cherry blossom viewing parties hosted annually by the prime minister.

As for banquets at a Tokyo hotel held on the eve of the cherry blossom party that were held every year and sponsored by Abe’s support group, Abe has claimed that the hotels had not made out detailed bills for their services and each participant paid the participation fees directly to the hotel.

He has also said the receipts did not show any name of a person or organization to which they were made out.

Replying to Tsujimoto’s questions in writing, however, ANA Intercontinental Tokyo, which served as the venue for this banquet three times in the past, said in an e-mail that it never fails to provide such bills to its customers nor issue a receipt that does not specify whom it is made out to.

The hotel has also said it receives the fees for such parties from the organizers in lump sums.

If the hotel dealt with the Abe support group’s banquets in this way, Abe could be accused of violating the Political Funds Control Law by failing to mention the expenses for these dinner parties in his legally required political funding reports.

Later, Abe said the hotel, when his office asked orally about the e-mail, said the answers to Tsujimoto were about general rules and not about any specific case. Abe insisted that there is no inconsistency between his previous claims and what the hotel told the opposition lawmaker.

The opposition parties urged Abe to contact the hotel again concerning the issue in writing and make public the results. But Abe rejected the request.

How is it possible for him not to make active efforts to clarify the allegations against him that have cast doubt on the credibility of his words?