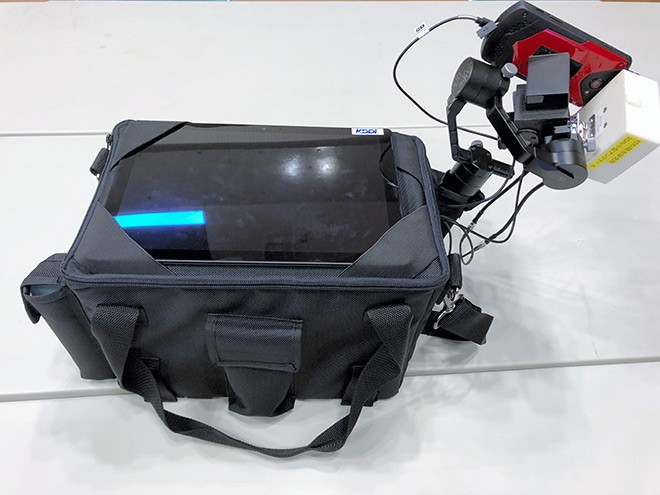 A portable cellphone base station weighing about 7 kilograms will be loaded on a helicopter. (Provided by KDDI Corp.)

Niigata Prefecture and telecommunications giant KDDI Corp. will test an airborne cellphone station this summer that can locate lost climbers who are out of the range of regular base stations.

The test will be conducted from a prefectural disaster-relief helicopter in the mountainous area of Uonuma in the prefecture.

A portable base station on the chopper will send out radio waves and enable rescuers aboard to communicate with lost climbers via smartphone up to 2 kilometers away.

The portable station can also detect subtle signals from smartphones, allowing rescuers to pinpoint the location of the climbers with a margin of error of 10 meters or less, even if they are hidden under the forest canopy.

“If we can locate lost climbers before their smartphone batteries run out, their survival rate will increase substantially,” a prefectural government official said.

According to the National Police Agency, 3,129 climbers were reported missing in Japan in 2018. The most common cause for the disappearances was that they lost their way, at nearly 40 percent, or 1,187, of the total.

Other reasons included slipping down slopes, injuries, illness and fatigue.

Trying to find missing climbers from the skies can take a considerable amount of time if they are shielded by thick vegetation or stuck along a mountain valley and are beyond the range of base stations.

In one case, a family became lost and died in the Gozu mountain range in Agano, Niigata Prefecture, in May 2018. It took more than three weeks to find their bodies.