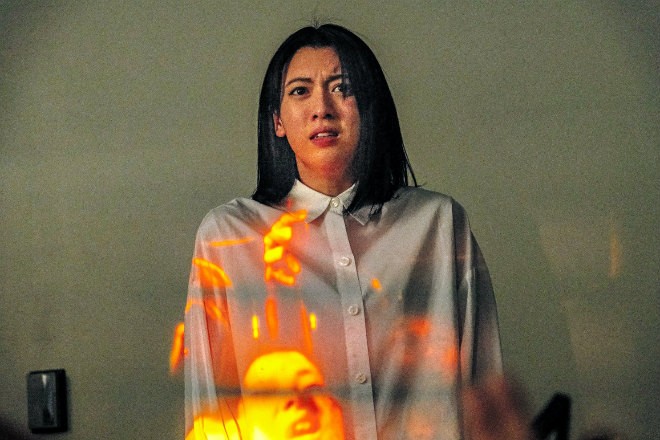 The "Ju-On: The Grudge" director's new project keeps audiences on the edge of their seats with his rapid-fire delivery of scary images.

"My intention was to unleash horror scenes at short intervals, which is something I haven't done in my recent movies," Shimizu said.

The story is set in an idyllic rural town in the Kyushu region. A spate of bizarre events and unnatural deaths begin to take place around clinical psychologist Kanade (Ayaka Miyoshi), resulting in a disquieting atmosphere. Kanade comes across a woman who has gone crazy and sings a weird children's song. Then Kanade's own brothers go missing.

Learning that they entered the old Inunaki Tunnel, Kanade heads there to unravel the mystery.

The director decided to work on the project after he was approached with an offer to make a film inspired by the old Inunaki Tunnel, which in real life is a well-known haunted spot in Fukuoka Prefecture.

Shimizu said that when he started his research, much of it online, he came across a number of urban legends mixed with facts and assumptions. Some tall tales said the tunnel leads to a village outside the control of the government, while others said that no one can return from the village.

"Urban legends and rumors are created because wherever people live, there are always negative facts and historical events they want to hide. I wanted to incorporate such elements into the movie," Shimizu said. "It is essential for the film to be scary because it is a horror movie, but it also has an underlying theme of a 'covered-up history.'"

And that is exactly the mystery Kanade seeks to solve.

Japanese horror movies, generically known as J-horror, remain popular around the world, including the "Ju-On" series for which Shimizu became famous.

The director said he received offers from at least 10 countries to purchase "Howling Village" before the film was completed.

"On the other hand, it has been a long time since we stopped calling (horror movies) J-horror in Japan," the director said. "People who remember the 'Ring,' 'Ju-On' and other movies that were booming at the time complained to me, saying things like: 'I want to see horror movies, but there aren't any these days."

To meet their needs, Shimizu said, "I went back to basics and incorporated classic methods to scare audiences. I also explored new ways to combine traditional ghost stories with imagery. I hope it attracts attention not only from long-time fans but also from new audience members."