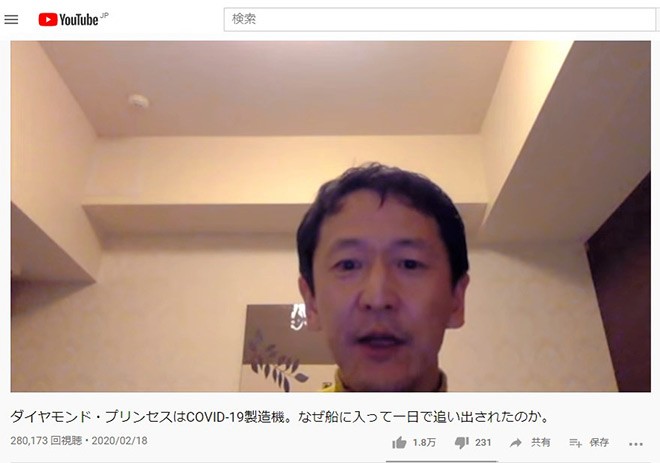 In a video, Kentaro Iwata, a professor at Kobe University Hospital, describes the conditions on the Diamond Princess cruise ship. (Captured from YouTube)

A professor of infectious diseases said “inadequate” quarantine measures aboard a coronavirus-stricken cruise ship have created conditions that are scarier than when he was dealing with outbreak hotspots in Africa and China.

In videos posted on YouTube in both Japanese and English on the night of Feb. 18, Kentaro Iwata described the scene on the Diamond Princess anchored off Yokohama as “chaotic.”

The health ministry, which is in charge of quarantine measures on the ship, rejected some of Iwata’s observations on Feb. 19, just before it allowed hundreds of passengers to start disembarking after their 14-day quarantine period.

By then, Iwata’s videos had been viewed more than half a million times.

At the start of the Japanese version, which runs for about 14 minutes, Iwata explained that his words are based on his personal views and have nothing to do with his employer, Kobe University Hospital, or other institutions of which he is a member.

Iwata said he boarded the Diamond Princess on Feb. 18, but “I was removed from the ship on the same day, and I’ll talk to you about why this happened.”

He said he wanted to offer his expertise on the ship after watching the number of confirmed infections continue to soar.

As of Feb. 18, 542 passengers and crew members on the Diamond Princess had tested positive for the virus. Other countries have blamed inadequate infection control measures for the rising number of confirmed cases on the ship.

Iwata explained that he had directly dealt with the Ebola outbreak in Africa and the severe acute respiratory syndrome (SARS) epidemic in China.

“I never had a fear of getting infected myself,” he said.

But he said he was very scared from the bottom of his heart that he would contract the new coronavirus amid the extremely terrible conditions on the Diamond Princess.

He said he feels it may be inevitable that he has also been infected.

Iwata said one iron rule in quarantine efforts is to distinguish green zones, which are free of the infectious disease, and red zones, which are potentially contaminated. He said there were no such distinctions on the Diamond Princess.

“There was no way to tell where the virus is,” Iwata said in the video.

He also noted that some crew members were not wearing face masks, while other people with fevers had left their confinement areas to visit a medical office on the ship.

Iwata said he never criticized officials on the ship and only offered suggestions on how to contain the virus. But he was ordered off the ship in a phone call around 5 p.m. that day.

“We address issues on the same day if they are raised by specialist physicians who are members of the infection prevention team after they check the ship,” Kato said.

A senior ministry official took issue with Iwata’s observation that nonprofessional people were in charge of infection prevention measures because no experts were aboard the ship.

The official said doctors and nurses who specialize in infectious diseases are working every day on the ship, and those involved in preventing infections receive instructions from an academic society on how to deal with pathogens.

As for the absence of green and red zones on the Diamond Princess, the official said, “Unlike hospitals, which are designed to separate certain zones from others, it’s structurally difficult to do the same on a ship.”

The official added that measures are being taken, such as prohibiting those aboard the ship from entering corridors when infected people are being taken to hospitals.

The English version of the video is available at the following website: (https://www.youtube.com/watch?v=vtHYZkLuKcI)