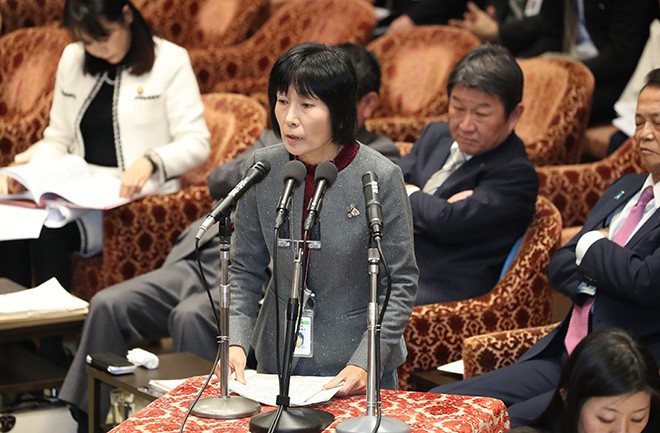 A National Personnel Authority (NPA) official retracted her Diet testimony, prompting opposition lawmakers to accuse the Abe administration of forcing officials to support its “impractical” explanation for extending the career of a friendly prosecutor.

Emiko Matsuo, director-general of the NPA’s Remuneration Bureau, said she made a slip of the tongue when she told the Diet on Feb. 12 that the government’s interpretation of the revised National Public Service Law in 1981 remained the same.

That interpretation clearly states provisions of the law on extending the mandatory retirement ages of civil servants do not apply to public prosecutors.

Matsuo’s comment raised eyebrows because it contradicted Prime Minister Shinzo Abe’s explanation for allowing Hiromu Kurokawa, chief of the Tokyo High Public Prosecutors Office, to work six months beyond his 63rd birthday, when he was supposed to have retired.

Abe said at the Feb. 13 Lower House plenary session that his administration had reinterpreted the law to allow the retirement age provisions to cover prosecutors.

Kurokawa is considered an ally of the Abe Cabinet. Opposition party lawmakers say the “illegal” extension of his retirement age is aimed at promoting him to the nation’s top prosecutor post.

At the Feb. 12 Lower House Budget Committee, Matsuo was asked about the 1981 government interpretation of the law.

“We continue to hold that interpretation until the present,” Matsuo said.

But she backtracked when she was called before the Feb. 19 session of the same committee.

“I used the term ‘until the present’ in an inaccurate manner so I would like to retract that part of my response,” she said.

Shiori Yamao, a lawmaker with the opposition Constitutional Democratic Party of Japan, asked Matsuo, “Why did you explain on Feb. 12 that the authority continues to hold the past interpretation without making any reference to the change in interpretation?”

Matsuo said she had no intention of concealing the reinterpretation and explained that she did not touch upon the change because she was not directly asked about it.

Matsuo further explained that Justice Ministry officials on Jan. 22 consulted the bureau about allowing the retirement age extension to cover prosecutors. She said NPA officials sent a written response on Jan. 24 saying they did not oppose that change.

When further pressed for her definition of “until the present,” Matsuo said it meant until Jan. 22, when the NPA was consulted by Justice Ministry officials.

After the Feb. 19 committee session, Yamao told reporters, “The NPA was forced to go along with the impracticable story” put together by the Abe administration.

The Justice Ministry has jurisdiction over the prosecutors’ office law.

Justice Minister Masako Mori has said the ministry changed its interpretation of the retirement age extension in late January. The Abe Cabinet approved the change on Jan. 31.

The delay in Kurokawa’s retirement has also raised concerns within Japan’s judicial system.

The heads of all district and high public prosecutors offices in Japan held a meeting in Tokyo on Feb. 19 and issued a rare request for the government to explain its decision to hold off on Kurokawa’s retirement.

One top prosecutor from central Japan said prosecutors, who are supposed to be impartial and neutral in carrying out their duties, are now being viewed questionably about their ties to the administration, according to sources who were present at the meeting.

“Unless something is done, trust in prosecutors will be called into question,” the prosecutor was quoted as saying. “It would be preferable to provide a more thorough explanation to the public.”

(This article was compiled from reports by Ryutaro Abe and Naoki Kikuchi.)