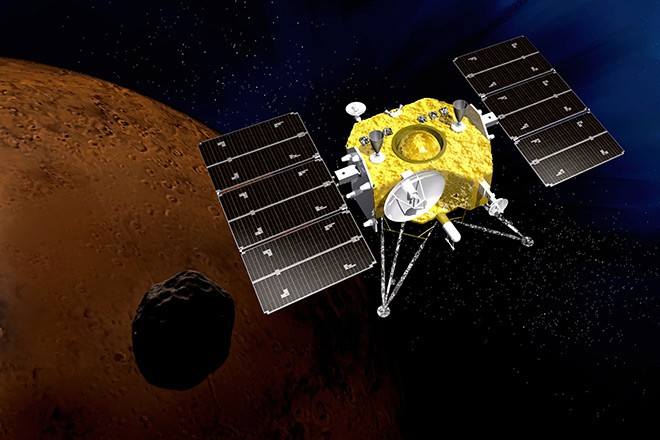 No country has landed a probe on a Martian moon, but a new Japan space mission aims to make that giant leap for mankind in 2024.

The Japan Aerospace Exploration Agency (JAXA) is now setting its sights on Phobos, the larger of Mars’ two moons, after it twice successfully sent a probe to a distant asteroid.

JAXA officials submitted a plan to the science ministry on Feb. 19 that calls for the probe to attempt a landing on Phobos to collect rocks and sand.

The probe will use similar technology installed on the Hayabusa 2 probe, which allowed JAXA to collect and retrieve samples from the asteroid Ryugu in 2019.

Hayabusa 2 is scheduled to release a capsule containing those samples above Australia at the end of this year.

A new H-3 rocket will be used to launch the exploration plan dubbed MMX in September 2024.

If the project progresses as planned, the probe will enter Martian orbit in the summer of the following year. The probe would be used over the next three years to study Phobos and its surroundings and attempt at least one landing to collect rock and sand samples.

It would then return to Earth in September 2029.

Phobos has a diameter of about 23 kilometers and gravity on the moon is about one-1,000th of that on Earth. The low level of gravity is similar to the asteroids to which both Hayabusa probes were sent in the past and that convinced JAXA officials that the technology used in those probes could be adapted for the Martian moon.

JAXA officials at one time considered sending a probe to Mars' smaller moon, Deimos, which has a diameter of about 12 km.

But Phobos was chosen as the object of the probe because of its proximity to Mars, which likely means Phobos has many particles that originated on Mars.

Phobos was also chosen because there is a great deal more data about possible landing sites, a result of the many observations made from Earth in the past.

The downside of going to Phobos is that the probe needs more fuel to approach it.

Japan decided in 2019 to participate in a U.S.-led plan for moon exploration. The plan involves constructing a space station that orbits the moon, with a future goal being to eventually launch a Mars explorer.

The MMX plan could provide valuable information for such future exploration of Mars.

The total cost of developing the MMX will be 46.4 billion yen ($417 million), close to double the 28.9 billion yen spent on the Hayabusa 2 probe project.