TEPCO ordered to cough up after it refused deal on compensation 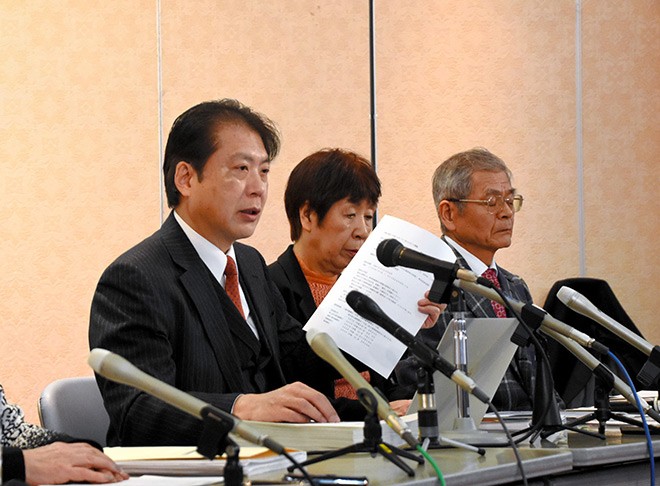 Plaintiffs and supporters at a news conference in Fukushima after the court ruling on Feb. 19 (Keiji Iijima)

FUKUSHIMA--The district court here sided with local residents seeking compensation for psychological damage resulting from the 2011 nuclear disaster after the operator of the stricken facility snubbed mediation efforts for a settlement.

The plaintiffs had sought 99 million yen in damages for their psychological suffering due to their voluntary evacuation after the triple meltdown at the Fukushima No. 1 nuclear power plant and fear of being exposed to high levels of radiation.

In his ruling, Presiding Judge Toru Endo noted that residents who evacuated voluntarily found themselves living an uncertain and insecure existence with no future prospects.

The court acknowledged that those who didn’t evacuate were also unable to move around freely, given that they lived in fear and anxiety over the prospect of being exposed to radiation.

The court ordered TEPCO to pay between 22,000 yen and 286,000 yen to each eligible plaintiff, in addition to a uniform compensation sum of 120,000 yen per person that the utility had already paid.

The court recommended a settlement last December, the first of its kind among 30 or so class action lawsuits filed around the country over the nuclear accident, but TEPCO refused to comply.

Residents living in designated voluntary evacuation zones in Fukushima city and other areas more than 30 kilometers from the nuclear power plant filed the lawsuit in April 2016, seeking higher compensation than the figure stipulated in the government’s guidelines.

The plaintiffs had sought to settle the lawsuit quickly in light of their mental exhaustion and advanced age rather than engage in a drawn-out process.

In a statement, TEPCO said it will consider how to respond to the ruling after thoroughly examining it.

After the ruling, Yoshitaro Nomura, a lawyer representing the plaintiffs, condemned the stance that TEPCO took on the matter.

“Refusing the court’s settlement offer was outrageous. It amounted to ignoring the company’s responsibility for causing this unprecedented nuclear disaster,” Nomura said.

Groups of disaster victims resorted to a system called alternative dispute resolution, or ADR, in the hope of winning compensation for the nuclear accident. But many of them started facing an impasse in the process two years ago after TEPCO refused to accept deals proposed by the Nuclear Damage Compensation Dispute Resolution Center.

The issue was taken up in the Diet, and the industry minister warned the utility to be more cooperative. However, the number of ADR cases that went nowhere continues to rise.

TEPCO refused to change course even after the district court recommended a settlement in a trial where the plaintiffs and the defendant are required to provide more solid arguments and proof.

The court-ordered compensation of 12.03 million yen comes to almost the same amount as the court proposed in the settlement last December. The government guidelines set individual compensation at 120,000 yen.

“TEPCO has made it clear it intends to make no compromise on settlement offers that may lead to a revision of the government’s guidelines,” said lawyer Izutaro Manaki, a member of the Daini Tokyo Bar Association who is well-versed in compensation issues.

As of Feb. 14, TEPCO had paid more than 9.32 trillion yen in compensation. The company has covered the costs through government loans and higher electricity rates.