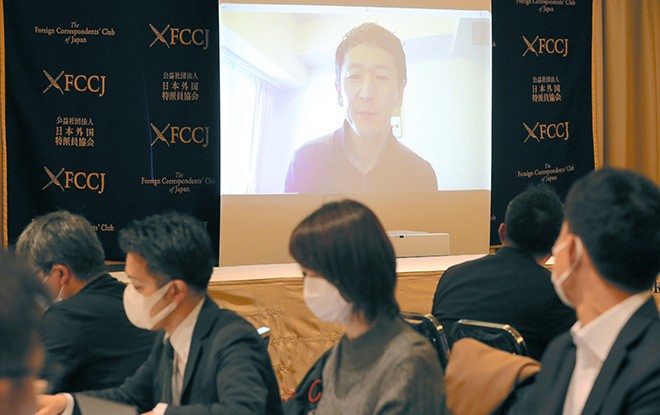 Kentaro Iwata, professor of infectious diseases at Kobe University, speaks at a teleconference at the Foreign Correspondents’ Club of Japan in Tokyo on Feb. 20. (Tsubasa Setoguchi)

An infectious disease specialist on Feb. 20 said he pulled his YouTube videos accusing Japanese health authorities of mishandling the quarantine aboard the Diamond Princess cruise ship, which went viral, but isn't backing off his assertion.

Kentaro Iwata, professor of infectious diseases at Kobe University, came under criticism from another doctor working in quarantine efforts aboard the ship, where more than 600 cases of the COVID-19 were confirmed.

In the 12-minute videos, posted in both Japanese and English, Iwata described the conditions aboard the Diamond Princess as “completely chaotic."

No distinction was made, he said, between infection-free green zones and potentially contaminated red zones, with some people coming and going between the zones without protective gear.

He boarded the ship docked at Yokohama Port as a member of Japan’s Disaster Medical Assistance Team on Feb. 18.

Iwata removed his videos while offering “deep apologies” to people he may have caused difficulties to with the clips.

Still, he insisted that the risk of infection continues among people remaining aboard.

One of the doctors involved in efforts to prevent the spread of the infection criticized the videos on Facebook, saying their contents “could back disembarking passengers and people fighting to contain the virus aboard the ship into a corner.”

The doctor also said Iwata was on the ship for “only less than two hours.”

Despite Iwata’s comments, the doctor said there was a distinction between the green zones and red zones even though it may not have been thoroughly enforced.

The doctor also raised doubts about Iwata’s claim that he passed a patient of the disease on the ship.

During a teleconference at the Foreign Correspondents’ Club of Japan in Tokyo on Feb. 20, Iwata said he removed the videos due to an improvement in the shipboard environment and the release of epidemiological data by health authorities.

Iwata said posting the videos was not meant to single out any individuals for criticism, but he decided to pull them to avoid any misunderstanding following opinions that they amounted to criticism of the quarantine efforts.

The ship carried about 3,700 passengers and crew members. Of 3,011 people who underwent testing for the virus, 621 infections were confirmed as of Feb. 19. About 450 passengers were allowed to leave the ship on Feb. 19 after clearing the two-week quarantine period, followed by another batch who disembarked on Feb. 20.

(This article was written by Yuko Matsuura and Gen Mikami.)