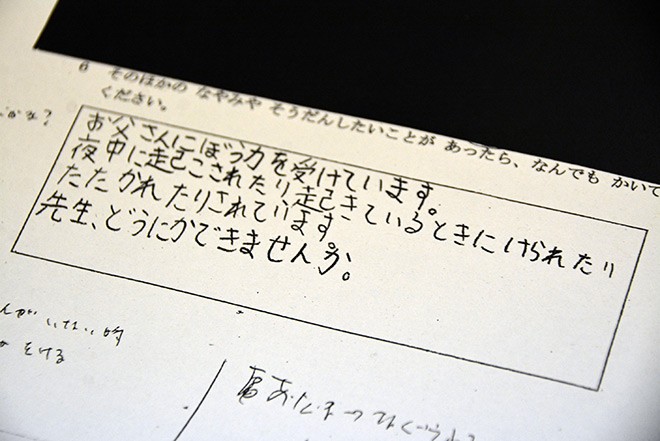 CHIBA--The defendant in a highly watched trial apologized to his dead daughter who was so severely abused that police could not determine the exact cause of her death.

“I deeply regret that my actions went beyond the scope of discipline,” Yuichiro Kurihara, 42, said at the first hearing of his trial at the Chiba District Court on Feb. 21. “Mii-chan, I am really sorry.”

Mii-chan was the nickname of his 10-year-old daughter, Mia, whose battered body was found in a bathroom of the family’s home in Noda, Chiba Prefecture, on Jan. 24, 2019.

The case drew wide attention not only because of the brutality the girl had suffered, but also because she had been sent back to live with her father despite asking for protection at her school.

Kurihara stands accused of committing six crimes, including bodily injury resulting in death, assault and blackmail, against his daughter.

Regarding the charge of bodily injury resulting in death, Kurihara said, “I don’t deny it.”

At the beginning of the hearing, Kurihara asked the court: “May I say one thing? It’s about how I feel.”

He continued: “I looked forward to seeing Mii-chan of the future, but now I can do nothing but apologize. (What I did) was unforgivable by any means, and I regret it from the heart.”

He pleaded innocent to the assault charge and denied some of the other allegations mentioned in the indictment.

“I had never considered it was OK to starve my daughter or put her under intense stress and debilitate her,” he said. “Nor had I ever instructed my wife not to feed Mia.”

According to the prosecutors’ opening statement, Kurihara dragged Mia by both hands at the house between Dec. 30, 2018, and Jan. 3, 2019.

He lifted up her body by the arms and dropped her on the floor. The impact left the fourth-grader with severe bruises on her face and a broken rib cage, prosecutors said.

Around Jan. 5, Kurihara ordered Mia to “stand up and go.”

The girl shook her head in refusal, so Kurihara dragged her to the bathroom and a dressing room and forced her to stand for long hours, they said.

Kurihara again forced Mia to keep standing for a prolonged period, without giving her food or letting her sleep, between Jan. 22 and Jan. 24, prosecutors said.

Around 1 p.m. on Jan. 24, Kurihara gave orders to Mia in the bathroom: “Take off your clothes in five seconds. Five, four, three, two, one.” He then repeatedly poured cold water over Mia’s body.

At night, when Mia tried to go to a bedroom, Kurihara snapped at her, “Why are you here?”

He took her to the bathroom again and repeated his cold-water torture, they said.

Police officials said the girl is believed to have died from starvation, intense stress, shock, irregular heartbeat or drowning.

The district court in June 2019 convicted Mia’s 33-year-old mother of aiding and abetting Kurihara in his abuse. She was sentenced to two-and-a-half years in prison, suspended for five years, with protective observation.

Ten hearings are scheduled in Kurihara’s trial, which is being conducted under the citizen judge system and is expected to conclude on March 9. A ruling will be delivered on March 19.

A total of 11 witnesses are expected to testify in court. Kurihara is scheduled to take the stand from March 4 to March 6.

(This article was written by Susumu Imaizumi and Erika Matsumoto.)