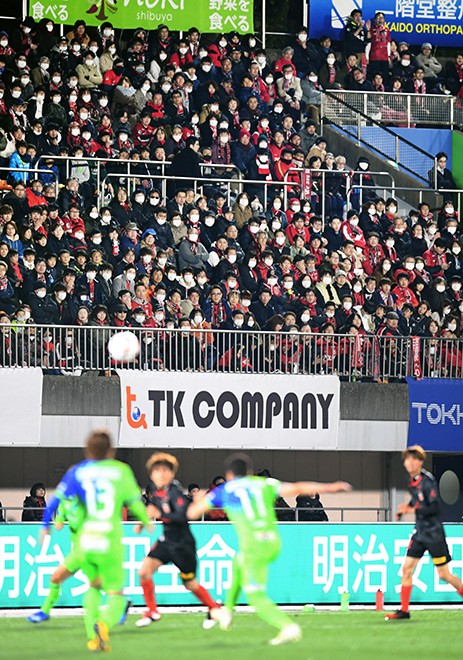 A health ministry advisory on holding big events while the coronavirus is raging prompted many organizers and facility operators to review how they do things to reduce the risk of adding to new infections.

The J.League went ahead with its first week of league games over the three-day weekend that started Feb. 22. Monday will be a national holiday as the emperor’s birthday falls on Sunday this year.

The opening J.League game was held Feb. 21 at Hiratsuka, Kanagawa Prefecture, pitting the hometown Shonan Bellmare against the Urawa Reds. The Reds won 3-2.

Many of the 13,000 or so fans in the Shonan BMW Stadium Hiratsuka wore face masks to guard against infection.

A local 58-year-old woman said her husband couldn’t believe she was going to the game.

“If all outdoor events are canceled, there would be nothing to do,” she explained.

At all seven entrances, fans had their hands sprayed with disinfectant. Fans were also banned from exchanging high-fives with the players, the norm before games.

Organizers of the Tokyo Girls Collection 2020 Spring/Summer, one of the largest fashion events in Japan, also said they would go ahead with the Feb. 29 show at the Yoyogi National Stadium First Gymnasium.

Organizers had already planned to install equipment at entrances to spray hypochlorous acid water on attendees as they enter the venue. The liquid is said to serve as a disinfectant.

Under the new health ministry directive on Feb. 20, event organizers also decided to install disinfectant spray containers at locations where tickets are checked.

Attendees will be encouraged to wash their hands with soap before entering.

“We believe we will be able to reduce the risk of infection to a great extent by taking these additional steps," said an event organizer. "The safety of the guests and those taking part is our priority.”

This year marks the 30th anniversary of the event, which is eagerly anticipated by fashion houses around the world as it highlights the latest trends among young Japanese women.

However, the indoor theme park Sanrio Puroland located in western Tokyo decided to suspend operations from Feb. 22 until at least March 12.

“There is no way we want to be blamed for spreading new infections among visitors," said a public relations representative. "We made the decision to protect the safety of visitors and our staff.”

The Tokyo metropolitan government also decided Feb. 21 to postpone or cancel indoor events that would involve at least 500 participants or at which food is served.

While the measure will extend over the next three weeks, it could be extended, depending on the spread of coronavirus infections.

Among events to be canceled over this weekend was one to commemorate six months before the start of the Tokyo Paralympics.