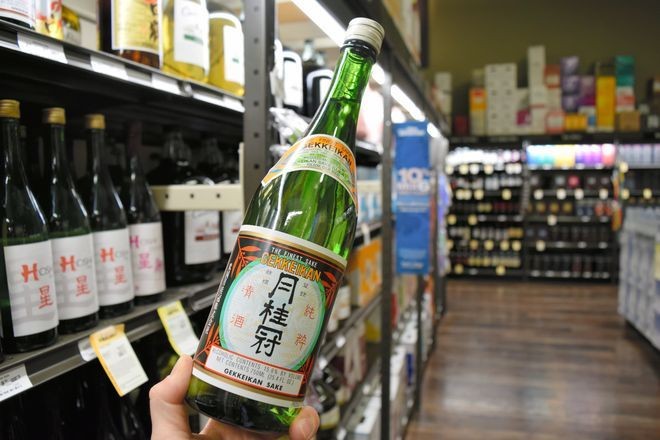 A 750-milliliter bottle of the "Traditional" brand of the Gekkeikan’s U.S. subsidiary is available for around 670 yen ($6) at the dedicated sake corner next to the wine and beer sections at a large liquor shop in Folsom, California. (Yoshikatsu Nakajima)

One day in early January, an elderly man was seen picking up a bottle labeled Gekkeikan Sake from a shelf lined with many sake products at a liquor shop.

While selecting sake is a common sight at liquor stores in Japan, the setting was at a store in a suburb of Sacramento, California, which is well known for its quality wine production.

The sake lover, a white man, said he often drinks Gekkeikan Sake, whose 750-milliliter bottle is available for around 670 yen ($6), both hot and cold at home. The sake brand is brewed in the United States

Buoyed by the worldwide Japanese food boom, sake is increasing in popularity in the United States and elsewhere outside Japan.

Gekkeikan Sake Co., a long-established brewery in Kyoto, set up a plant in the United States three decades ago to deliver the Asian nation’s traditional beverage to tables, greatly contributing to the wide acceptance of rice wine.

Sake is currently consumed hot and cold, and also used in cocktails enjoyed by a wide range of consumers all over the world. Jumping on the bandwagon, other breweries started expanding their production to outside the homeland of sake.

SAKE ON TABLES EVERY DAY

The production facility of Gekkeikan Sake is situated in a residential area near the liquor store in Sacramento. On its grounds is a Japanese-style garden with tanks for fermentation installed beside it.

In the plant building, a large American man was checking whether the rice he was holding had been properly steamed, as the process is important in creating a high-quality sake. While 27 people work there, most are locally employed staff members.

According to Bill Piper, vice president of a U.S. Gekkeikan subsidiary, its employees learned how to brew Japanese sake at the factory from scratch.

Piper, who switched from a beer brewer to Gekkeikan around 20 years ago, guides visitors through the plant while devoting himself to sake production. Other events, such as a sampling session and a sushi cooking lesson, have been organized to publicize the brew at the facility site as well.

Promotional campaigns were also staged to make sake not just “a special drink” served at luxury restaurants but one for daily consumption so that the alcoholic beverage would be sold at local supermarkets.

Those efforts have resulted in an increase in production with the current annual output reaching 6,000 kiloliters, a level comparable to more than 3.3 million 1.8-liter standard sake bottles.

The “junmai” pure-rice sake with rich flavor earned such a good reputation throughout the globe that the U.S.-made product has been exported to Europe, South America and South Korea. It has also won an award in an internationally prestigious contest.

Gekkeikan began brewing in the United States in 1989, when sake started to be accepted by local consumers as Japanese cuisine grew in popularity as healthy food. But its endeavor has not been without setbacks.

As the quality of water is especially important for brewing, a town known as Folsom near Sacramento was selected out of no less than 30 candidate sites because it is a home to many paddy fields and a lake into which snowmelt runoff flows.

The Californian rice species produced there has the same origin as the famous Yamada Nishiki rice variety for use in sake brewing, so the locally cultured rice had the potential to create exceptional rice wine.

Equipment and machines to prepare rice malt and squeeze sake out were imported from Japan. Multiple employees were sent from Kyoto in rotation to supervise the production, showing locally hired staffers the basic know-how, including how to brew “cleanly” and “carefully.”

“It is only natural that sake cannot be brewed in the same way, since rice, water and personnel are all different from Kyoto,” said Masahiro Namise, president of the U.S. subsidiary. “We rather regard the difference in taste as each sake’s unique feature.”

Kotaro Arai, 50, who runs the Mikuni Japanese restaurant in California for 30 years, said he feels that Japanese sake has increasingly been accepted as part of culture by a wider range of people.

“In the past, only some people would occasionally sip hot sake, but more various ways to enjoy sake have now resulted in an increasing number of orders at my restaurant,” Arai said.

As such breweries as Ozeki Co. and Takara Shuzo Co. have also succeeded in producing sake in the United States from local rice and water, new brewers have emerged who are inspired by the success of traditional makers to create “craft sake” by themselves.

Namise hails the move, stating that the trend “could lead to the revitalization of the sake market.”

Alcoholic drink exports are brisk with sake products worth 23.4 billion yen, more than triple that of 10 years prior, shipped from Japan in 2019, according to the Finance Ministry’s trade statistics. While the largest importer is the United States, China and Hong Kong are second and third, respectively.

But the domestic consumption halved over the last 20 years as fewer people choose the tipple.

Under such circumstances, more breweries have taken measures to win over new customers outside Japan.

Emerging Wakaze Inc. in Tsuruoka, Yamagata Prefecture, established its brewery in a Paris suburb. It is looking to have its product widely accepted by local consumers through generating sake from French-made rice, water and wine yeast.

Wakaze decided to brew sake in France because Japan’s tighter restrictions make it difficult for new companies to enter the sake market.

Asahi Shuzo Co., which is based in Iwakuni, Yamaguchi Prefecture and is famed for its popular Dassai brand, is working to set up a brewing facility in New York state with an eye toward pitching “daiginjo” top-quality sake made from U.S.-grown rice in 2021.

Another brewing corporation is offering support for an overseas brewer to make sake.

Michizakura Shuzo is a small brewery in Nakatsugawa, Gifu Prefecture, which produces only 36,000 liters annually. Its president, Koji Yamada, who also serves as a sake brewer, received a request in 2014 for assistance to introduce a brewery in Mexico from a local firm.

Rice malt, a key ingredient for sake, is available in a dried form, and therefore rice wine can be brewed even outside Japan if rice and quality water can be secured.

(This article was written by Yoshikatsu Nakajima and Kazuyuki Kanai.)