Naruhito turns 60, pledges to perform duties as symbol of Japan

Emperor Naruhito meets reporters at the Akasaka Imperial Residence on Feb. 21, two days before his 60th birthday. (Provided by the Imperial Household Agency) 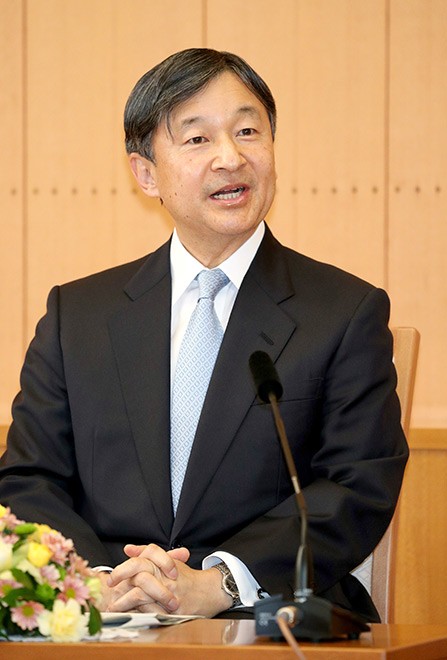 Emperor Naruhito gives a news conference at the Akasaka Imperial Residence on Feb. 21, two days before his 60th birthday. (Pool)

Marking his 60th birthday and his first since ascending the throne in May, Emperor Naruhito vowed to perform his official duties as a symbol of Japan as stipulated under the Constitution.

“I will make further efforts to sincerely fulfill my duty as symbol of the nation while working for my self-improvement and always giving thought and consideration to people’s feelings,” he said at a news conference at the Akasaka Imperial Residence in Tokyo on Feb. 21, two days before his birthday.

Naruhito's first public birthday celebration as emperor at the Imperial Palace on Feb. 23 was canceled as a preventative measure against the spread of the COVID-19 infection.

He ascended to the throne after the abdication of his father, Akihito.

On his wife, Empress Masako, Naruhito said, “She has carried out many activities thanks to the warm support she received from many people upon my ascension to the throne.”

Masako has been receiving treatment for a stress-induced "adjustment disorder" for many years, which has caused her to reduce her public duties.

The emperor noted that the empress tends to experience lingering fatigue after attending a big event or a series of events.

“I would like for my wife not to push herself too hard and steadily do all she can do,” he said.

The couple’s daughter, Aiko, will start her college life at Gakushuin University in Tokyo from April, majoring in Japanese literature.

“I am hoping that she will deepen her thoughts by learning plenty of things from many people while keeping a sense of gratitude and giving consideration to others,” he said.

Naruhito also noted that the pool of royals to perform official duties is shrinking as some are too aged to do so and some female members lost their imperial status upon their marriage to commoners.

“The situation is an issue associated with the future of the imperial family,” he said.

But the emperor stopped short of discussing the issue further, saying it is related to the imperial family system.