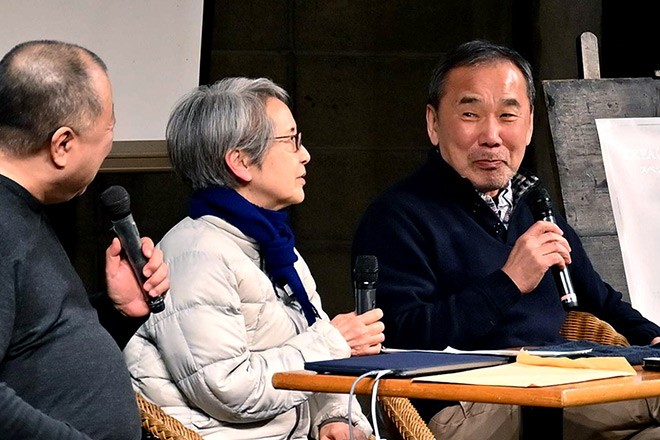 From right, Haruki Murakami, Yumi Yoshimoto and Kyoichi Tsuzuki at a talking event in Kumamoto on Feb. 22 (Yoshihisa Uehara)

KUMAMOTO--From one famed novelist to another, Haruki Murakami revealed that some of the funds he helped raise for recovery from the 2016 Kumamoto earthquakes went to repair the former home of Natsume Soseki (1867-1916) here.

Murakami, calling the Japanese literary giant one of his favorite novelists, said he used part of the 13.5 million yen ($120,535) donated by the public to repair and preserve the house Soseki once called home.

“It was a miracle that the residence survived,” Murakami said of the structure in Chuo Ward. “We wanted to preserve it.”

His comments came at a talking event on Feb. 22 given with his friend and photographer Kyoichi Tsuzuki and Yumi Yoshimoto, an interior coordinator and essayist who lives in Kumamoto. The event drew about 200 people.

The trio visited Kumamoto in June 2015 for a project for women’s magazine CREA. After the pair of devastating earthquakes in April 2016, the editorial department of the magazine launched an effort to solicit donations at the suggestion of Murakami.

Part of the funds raised went to repair Soseki’s residence, which was damaged in the temblors. It was Murakami’s idea, and the other two agreed with it.

Soseki taught at a local high school when he resided in Kumamoto for four years before he turned to writing and achieved acclaim as one of Japan’s greatest novelists.

Murakami said his childhood home in Ashiya, Hyogo Prefecture, was damaged in the 1995 Great Hanshin Earthquake and shared his experiences of strolling through his hometown after reconstruction.

“Ashiya was no longer the city I used to remember,” he said. “But I realized that there is nothing we can do about it. It is difficult to restore what used to be despite our wishes. The only option left with us is to create new values.”

Murakami also said at the event that they wanted to report to donors exactly where they spent the funds.

The rest of the money went to help finance a live concert in Nishihara, a village in the prefecture, as Tsuzuki wished, and the rebuilding of the Kumamoto City Zoological and Botanical Gardens, at Yoshimoto’s urging.

Organizers of the talking event reminded audience members to take precautions against the spread of the new coronavirus by distributing face masks and urging them to use disposable wipes containing alcohol placed at the entrance.

The latest event followed a charity event given by the three in September 2016.