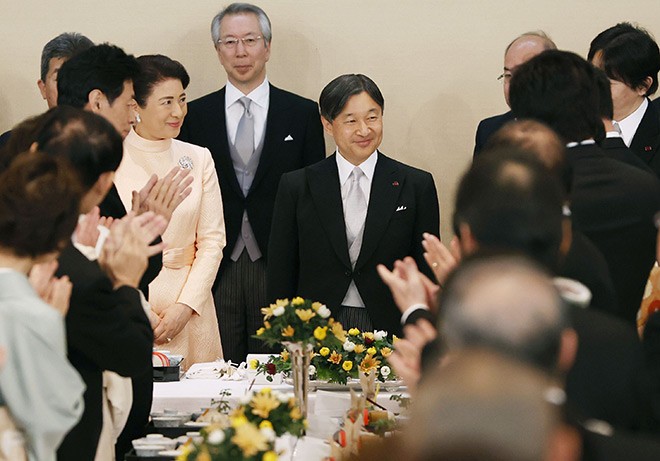 After a toast, Emperor Naruhito receives warm applause at a Feb. 23 banquet to celebrate his 60th birthday at the Homeiden hall of the Imperial Palace. (Pool)

Emperor Naruhito marked his 60th birthday at functions involving hundreds of government officials and foreign dignitaries on Feb. 23 after a celebratory event for the public in front of the Imperial Palace was canceled due to the spread of the new coronavirus.

A banquet held at the Homeiden hall inside the palace was attended by Prime Minister Shinzo Abe, along with heads of the legislative and judicial branches as well as Diet members.

“I am very delighted to share this celebration with you," Naruhito told the 450 or so assembled guests. "Taking this opportunity, I would like to wish people’s happiness, the country’s prosperity and your health.”

A tea party was also held at the Shunju-no-Ma hall that was attended by about 190 ambassadors and embassy officials representing 127 countries and regions.

Since his ascension to the throne in May, Naruhito has attended attestation ceremonies for 92 government officials and accredited ambassadors from 30 countries and signed and put his seal on 790 documents delivered by the Cabinet.

The emperor has also made nine official trips to rural areas.