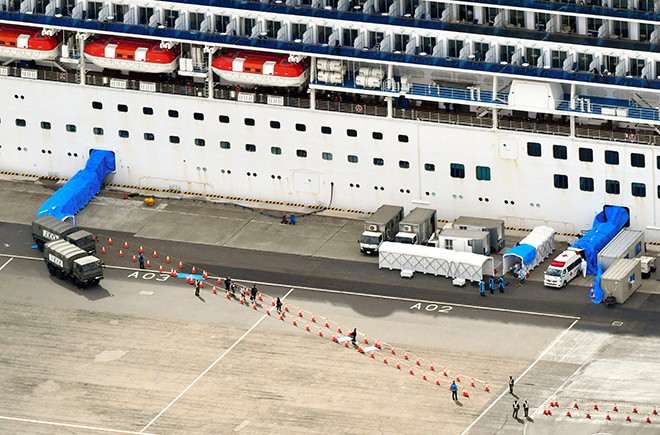 Health authorities are at a loss to figure out how a woman in her 60s who tested negative for the new coronavirus turned out to be infected after she disembarked from the quarantined Diamond Princess cruise ship at Yokohama Port.

The woman, a resident of Tochigi Prefecture close to Tokyo, was tested on Feb. 14 and left the vessel on Feb. 19. She tested positive on Feb. 22.

Officials suspect there are only two explanations for the situation. She either became infected after she took the virus test, or was infected immediately before she was tested but a positive reading did not show up because the virus had not proliferated sufficiently to be detected.

The woman's case has put health officials in a quandary as questions are now being raised about whether the authorities took adequate measures to prevent the virus from spreading aboard the ship that carried more than 3,000 passengers and crew members.

Jiro Yasuda, a professor at Nagasaki University specializing in virology, speculated that preventive measures were insufficient because quarantine and government officials working on the ship were infected later.

“It seems highly likely that the first infected person infected another and so on, like a domino effect, so that the contagion expanded even after Feb. 5 (when health authorities started to implement measures to curb infection on the ship)," he said.

Many passengers who have already disembarked from the ship expressed fears they may yet prove positive if they are tested again.

A man in his 70s who lives in Nagano Prefecture said he also tested negative before he disembarked on Feb. 20.

“But I fear I might also be infected," he said.

The man believes this is because he was tested on Feb. 15 but not allowed to leave the ship for five more days.

During “the waiting period,” passengers were able to take walks on the deck and he went out every alternate day.

When he went for a stroll, he invariably was in the company of between 70 and 80 other passengers.

This was when a spike of positive cases was confirmed on the ship.

Nearly 700 passengers are now known to have been infected.

"Measures to keep passengers isolated had clearly collapsed," he said.

A 76-year-old man from Saitama Prefecture who also took the cruise and tested negative for the virus before he disembarked on Feb. 19 said the credibility of the test would now be called into question.

He was annoyed at being contacted by the health ministry the following day and told, "We want you to stay at home and refrain from going out for non-urgent matters until March 4.”

The man said his health condition seems to be OK but that he and his wife have no plans to leave the house even once during that period because, "I must avoid becoming an infectious source.”

Many passengers who left the ship made their own way home using public transportation.

"I worry about having a positive reading any day soon," said a 73-year-old man from Osaka Prefecture.

He and his wife left the ship around 11 a.m. on Feb. 20 and went to Yokohama Station on a chartered bus. From Yokohama, they took a train to Tokyo's Haneda Airport and flew to Itami Airport in Osaka Prefecture, after which the couple took a train and a bus to get home.

They have remained house-bound since they got back.

The husband does not have a fever or a cough, tell-tale signs of infection, but he said, “I am so worried, so obviously others are also worried."