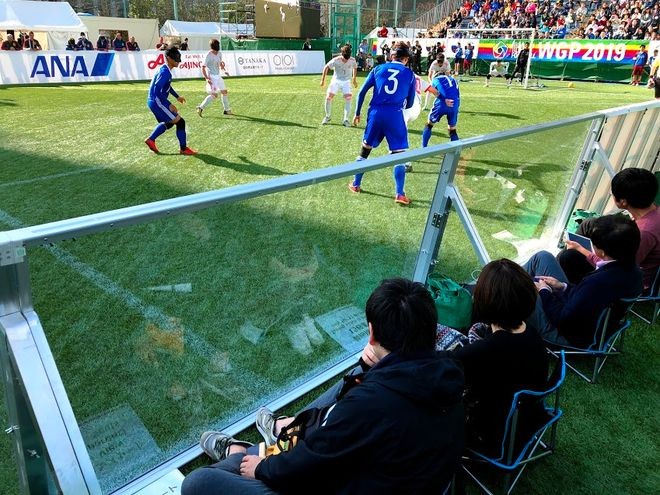 I watched a women's blind soccer international friendship match on Feb. 22 in the city of Saitama.

The game was played on a pitch little larger than a basketball court. There were 10 players in all--five from each team--and all were blindfolded except for the goalkeepers.

The coaches shouted instructions to the players, and the specially designed ball jingled and rattled. These sounds mingled with the voices of the players communicating their moves to their teammates, as well as the pounding of their feet on the pitch.

The sport is for blind or visually impaired players, and the latter rely primarily on the voices they hear to execute dribbles and passes.

How it's played utterly boggles the mind, as I, for one, cannot even take a step when I am blindfolded.

In the game I watched, the Japanese national team trounced its Argentinian counterpart 8-0.

Actually, every single goal was scored by Sora Kikushima, 17, who ran at top speed to intercept the ball and dodge every opponent, and immediately kicked the ball into the goal with her right foot.

Her impaired vision owes to a congenital disease. What is the secret of her superb play?

Kikushima "sees" a virtual pitch in her mind.

"It's like I'm a bird looking at the direction of each shot from up in the air," she explained.

Making up for the absence of her sense of sight, her entire body acts as a "sensor" that processes data, such as airflow and human movements around her.

Whenever I watch any sport designed for the physically impaired, I'm truly moved by the profundity of the human capacity for extraordinary performance by making up for the loss of certain physical functions.

Since there are not yet many blind female soccer players, the Tokyo Paralympics this summer will have only men's events.

However, the first international women's blind soccer championship is scheduled for November.

I think I'm just going to sit back and enjoy whatever the women will keep doing.