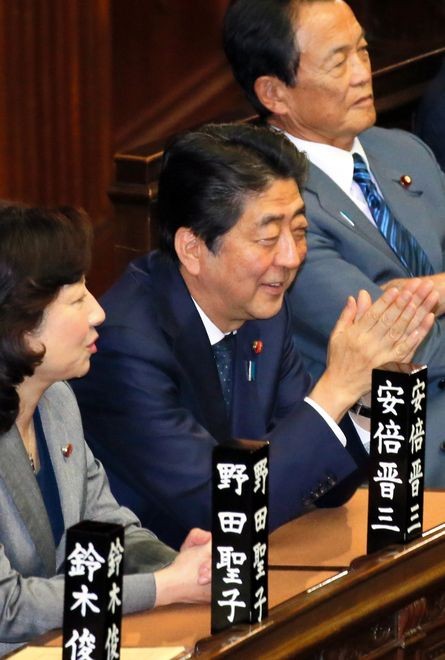 Prime Minister Shinzo Abe’s administration has often responded to scandals and problems by making specious, hollow promises to “listen to the voices of the people” and “engage in meticulous debate” on the issues involved.

These remarks are designed simply to avoid tackling the realities.

The Abe administration has been resorting to this old trick again during Diet debate on issues concerning the government’s plan to introduce integrated resorts (IRs) featuring casinos.

Lower House lawmaker Tsukasa Akimoto, who was appointed by Abe as senior vice minister at the Cabinet Office in charge of IR projects, has been indicted for allegedly receiving bribes from a Chinese company seeking to operate a casino in Japan.

Serious questions have also been raised about the process of the enactment of the law to promote IRs in December 2016. But the Abe administration has continued forging ahead with this controversial initiative.

In response to the bribery scandal, the administration has vowed to establish rules for casino operators to make contacts with government officials and incorporate the rules into official guidelines for developing and operating IRs.

But it is hard to believe that this baby step will ensure a fair selection of the IR operators.

During a Lower House Budget Committee session, an opposition legislator urged the administration to “stop to clear up the essence of the problem and all the factors behind the collusion.”

But Abe responded to the proposal with the familiar refrain quoted at the beginning and refused to confront the reality.

He also turned down opposition requests for an investigation into the contacts between the local governments lobbying to host an IR and would-be casino operators and the publication of the findings.

Despite the arrest and indictment of Akimoto, the government has not changed its plan to accept applications from local governments to become an IR host during the first seven months of next year.

But the government has refused to give any specific estimate of the expected economic benefits of the IR initiative, which has been touted as a centerpiece of its growth strategy.

In an interview with The Asahi Shimbun, tourism ministry officials reiterated their past explanation that it is impossible to make such an estimate because the locations of the resorts have not been determined yet. If so, how can the government claim the casino program will serve as a major driving force of the nation’s economic growth?

The policy initiative has also raised questions about the problem of gambling addiction.

When an opposition lawmaker asked whether the government has any plan to impose upper limits on the money a guest can bet or on the amount an operator can lend to customers, Abe only said the administration is working on a system to prevent addiction.

Abe’s response was apparently based on the limit on access to casinos imposed by the law to introduce IRs. The law restricts a person’s gambling at a casino to “three times a week and 10 times in 28 days.”

But experts have warned that the restrictions would not be enough to prevent addiction and called for stronger measures to deal with the problem.

But the government still has no plan to take any additional action to tackle the serious problem one and a half years since the law was enacted. That indicates the administration has no intention of listening to the “voices of people” that disagree with its policies and proposals.

In an Asahi Shimbun poll in January, 64 percent of the respondents said the process of developing IRs should be frozen, compared with 20 percent saying it should proceed as planned.

In a February survey, the ratio of respondents who said they felt the IR initiative would create more problems than benefits was nearly twice as high as that of those expressing the opposite view.

The Abe administration seems intent on promoting the initiative without being prepared to pay serious attention to the voices of doubt and opposition. This stance of the administration is likely to create serious problems for the future of the nation.

The first sentence of the 13th paragraph originally read: “Tourism minister Kazuyoshi Akaba has said it is impossible to make such an estimate because the locations of the resorts have not been determined yet.” But Akaba did not make such a comment.