Panel: Next two weeks crucial in slowing spread of coronavirus 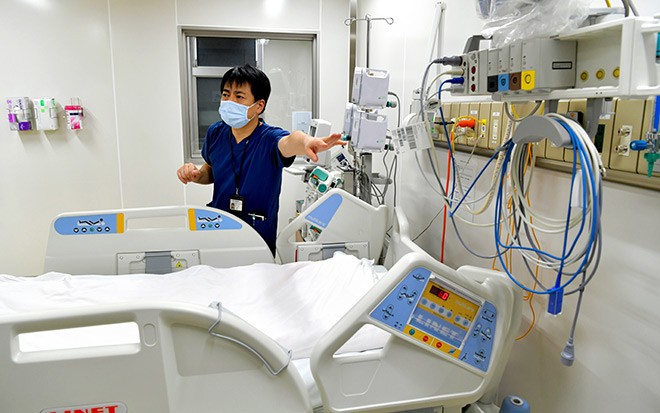 The next two weeks will be critical in curtailing the spread of the new coronavirus in Japan, a government panel said, urging the public to take such measures as avoiding parties and rush-hour trains.

“This will be an extremely important period to restrain as much as possible the speed at which the number of infected patients increases,” health minister Katsunobu Kato said at the Feb. 24 meeting of the panel of experts.

The central government was to decide on a basic policy direction on Feb. 25 that will call on local governments to take various steps, including tracking down anyone who had come in close contact with those infected with the coronavirus.

The panel’s recommendation said it would be impossible to prevent everyone from becoming infected because “the virus is one for which there is no complete defense against infection.”

But the panel said it would be possible to slow down the speed at which new infections arise if precautionary measures are taken.

For example, people should avoid long conversations with many others at arm’s length away because of the higher risk of infection during such close encounters.

The panel also advised those with minor cold-like symptoms or fevers to rest at home rather than seek treatment at medical institutions that may already have their hands full.

It stressed that people with no obvious symptoms should not visit medical institutions simply because they are worried about becoming infected.

The panel pointed out that many hospitals in the greater Tokyo metropolitan that specialize in infectious diseases are now treating the large number of people who were infected aboard the Diamond Princess cruise ship.

The panel said special hotlines have been set up around the nation for those who have returned from China or who have come in close contact with infected people. It said those numbers should be called if a fever of 37.5 degrees or higher persists for four days, or two days for elderly people and those with pre-existing conditions.

A number of panel members held a news conference after the Feb. 24 meeting and urged the public to be careful.

“Even those without symptoms should avoid going to stand-up dinner parties or (crowded) drinking sessions,” Shigeru Omi, president of the Japan Community Healthcare Organization, said.

He also said the risk of infection could be lowered if passengers who use hand straps on the train wash their hands immediately after reaching their offices.

As of 11 p.m. on Feb. 24, 851 coronavirus infections had been confirmed in Japan, including 692 from the Diamond Princess. Eight were government officials who worked on handling and transporting the infected from the ship, including two new cases of a health ministry bureaucrat and a quarantine officer announced by the health ministry on Feb. 24.

Eleven other new cases were confirmed around Japan.

Seven foreigners who returned to their home nations after departing the Diamond Princess have also tested positive for the coronavirus.