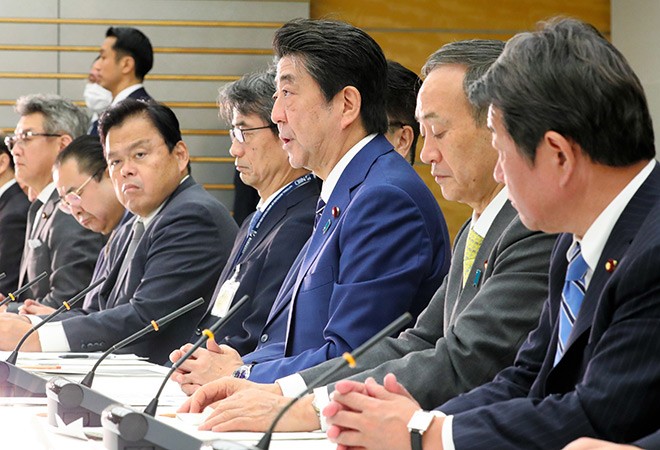 A team of experts will be dispatched to Hokkaido to help fight the spread of the coronavirus there, which numbered 30 cases as of 11 p.m. on Feb. 24, the second highest among Japan's 47 prefectures.

The decision along with other measures was made at a Feb. 25 meeting of Cabinet ministers specially tasked with responding to the outbreak.

“Now is an extremely important time for bringing the infection epidemic under control at an early stage,” said Prime Minister Shinzo Abe.

The task force approved a basic policy direction that includes measures to prevent a spread of the coronavirus and reinforcing the medical services system as an increasing number of infections have arisen with no clear understanding of how they spread.

Abe said that the central government would provide support to local governments where multiple infections have broken out, with Hokkaido being one of the first targeted.

Meanwhile, Chief Cabinet Secretary Yoshihide Suga indicated the government would not hesitate to boost the economy with new measures now that signs have arisen of the negative global economic impact from the coronavirus.

While saying that preventing a further spread of infections was the top priority, Suga indicated additional measures could be in the works

The government approved about 15.3 billion yen ($138 million) on Feb. 13 on measures including helping local economies reeling from the drop in foreign tourists in the wake of the coronavirus outbreak.

At the same time, Suga said there was no change in the government recognition that the Japanese economy was continuing on a gradual recovery course.

Other Cabinet ministers also touched upon their concerns about the economic effects of the spreading coronavirus at their respective news conferences.

Finance Minister Taro Aso said there was no telling when the infections would end or the extent to which they would spread.

Yasutoshi Nishimura, minister in charge of economic revitalization, said, “There will be a need to pay sufficient attention to the effects on financial markets and other areas.”