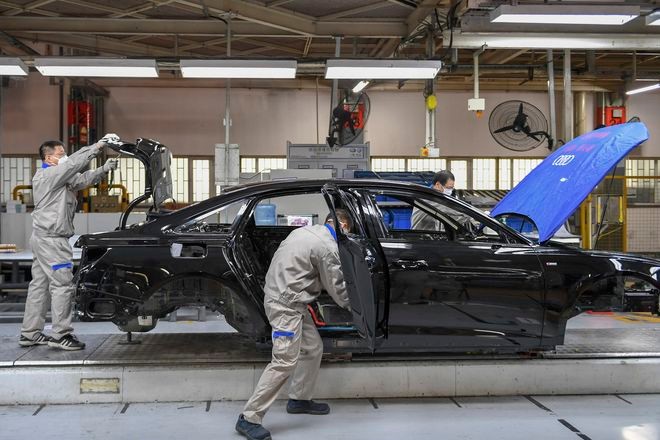 BEIJING—Factories that make the world’s smartphones, toys and other goods are struggling to reopen after a virus outbreak idled China’s economy. But even with the ruling Communist Party promising help, companies and economists say it may be months before production is back to normal.

The problem is supply chains — the thousands of companies that provide components, from auto parts to zippers to microchips. China’s are famously nimble and resourceful, but they lack raw materials and workers after the most intensive anti-disease measures ever imposed closed factories, cut off most access to cities with more than 60 million people and imposed travel curbs.

In smartphones, an industry that relies on China to assemble almost all its handsets, some components suppliers say production is as low as 10% of normal levels, according to Nicole Peng of Canalys, a research firm.

“The bad news is that there will be further impact, and the impact is worse than a lot of people initially expected,” said Peng.

Travel and retail businesses that need Chinese customers have suffered the most so far from the partial shutdown of the second largest economy. But brands including Apple Inc. say it is starting to disrupt their supplies. Analysts warn the longer that disruption lasts, the more damage will spread to wider industries and other economies.

Global brands have used low-cost Chinese labor to assemble goods for three decades. Now, they increasingly depend on China to supply auto, computer and other components. Disruptions can make this country a bottleneck, choking off their sales.

The most optimistic forecasts call for bringing the virus under control by March, allowing manufacturing to rebound. Gloomier outlooks say the outbreak might last until mid-May or later. Or, as the World Health Organization warned this week, authorities might fail to stop its global spread.

Automakers and other factories are reopening, but analysts say they won’t restore normal production until at least mid-March.

“If factory work does not spike in the coming weeks, a global parts shortage would likely emerge,” Taimur Baig and Samuel Tse of DBS said in a report.

There is no indication yet of an impact on consumers abroad, but retailers are starting to warn some products might be late or unavailable.

China also is a major supplier of chemicals for the global pharmaceutical industry. The outbreak has prompted concern supplies might be disrupted but there is no indication that drug production has been affected.

Beijing is promising tax cuts, though economists say financial help will have limited impact when anti-disease controls still in effect are still keeping workers away from factories and disrupting the movement of goods.

On Sunday, Xi said “low-risk areas” should change disease-control measures to fully restore production while high-risk areas focus on fighting the epidemic, according to the official Xinhua News Agency.

Manufacturers face a shortage of workers after millions who visited their hometowns for the Lunar New Year holiday were stranded there by the suspension of plane, train and bus services.

The government of Yiwu, a southeastern city known for its thousands of suppliers of buttons, doorknobs and other components to export manufacturers, says it arranged planes and trains to help their employees get back to work.

China accounts for about one-quarter of global manufacturing when measured by the value added in its factories. But it is the final assembly point for more than 80% of the world's smartphones, more than half of TVs and a big share of other consumer goods.

Apple, which has most of its iPhones and other products assembled by contractors in China, rattled stock markets when it warned Feb. 17 that revenue would suffer due to supply disruptions.

“We would certainly expect to see more news like that,” said Simon Weston of AXA Investment Managers in Hong Kong.

Other global companies that need Chinese plastics, chemicals, steel and high-tech components also “face reduced production,” according to Kaho Yu of Verisk Maplecroft, a consulting firm. Yu said that is likely to last through the quarter ending in September.

The American Chamber of Commerce in Shanghai said last week half of the 109 companies that responded to a survey reported their global operations already are affected. It said 78% reported they lacked sufficient staff to run production lines.

Some companies including Ralph Lauren Corp. already were moving out of China due to rising costs and U.S. tariff hikes in a fight over Beijing’s technology ambitions and trade surplus. But many still depend on China for components or some stages of manufacturing.

Samsung is “feeling the heat” because it shifted smartphone assembly to Vietnam but needs experienced Chinese managers to run those factories, Peng said. She said they visited China for the Lunar New Year and are blocked from returning to their jobs.

Other companies including global automakers that rely increasingly on the Chinese market are restarting production but say the pace depends on whether they can get components.

China accounts for about one-quarter of global auto production and according to UBS provides 8% of global exports of auto components. Many use “just in time” manufacturing, delivering components when needed. Those factories have limited stockpiles to ride out disruptions.

In China, factory production in export-oriented coastal provinces is back above 70% of normal levels, according to Cong Liang, the general secretary of the Cabinet’s planning agency, the National Development and Reform Commission.

“Companies are working overtime,” Cong said at a news conference. He insisted the epidemic’s impact is “short-term and generally controllable.”

Economic activity is “likely 45% back on track,” said a Citigroup report.

Coal consumption, one way to measure industrial activity, is 60% of the average level in the same period during 2017-19, according to UBS. It said real estate sales are 10% of normal.

Haier Group, one of the world's biggest home appliance manufacturers, said its suppliers are back to about 80% of normal production. The company said its own factories will be operating normally by the end of February.

Some smaller companies that lack the resources of global industrial giants but might be the only source of a critical component are struggling to reopen.

In the southern city of Shenzhen, a computer monitor maker is closed because some of its managers are in Hubei and cannot get back to work, according to Global Sources, a company that links buyers to Chinese suppliers.

Others manufacturers are looking for alternative suppliers but say foreign sources can’t match Chinese prices or service, according to Global Sources.