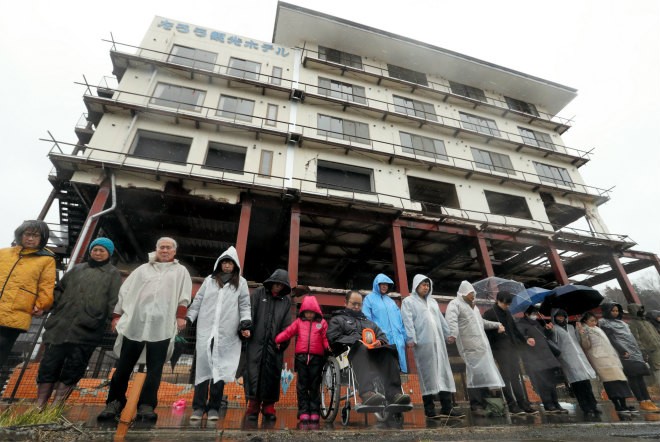 The remains of the destroyed Taro Kanko Hotel in Miyako, Iwate Prefecture, are a reminder of the powerful 2011 tsunami. (Asahi Shimbun file photo)

Instead of a local fruit or fish, Miyako officials in Iwate Prefecture are offering a guided tour showing damage from the 2011 tsunami for people who redirect their tax payments to city coffers.

The tour of the destroyed Taro Kanko Hotel has been provided for donations of 10,000 yen ($90.60) made through the hometown tax payment program, called “furusato nozei,” since November.

“Event-type gifts are growing in popularity across the nation,” a Miyako official said. “We thought about what we could do. We created the program to tour the remnants of the disaster caused by the tsunami to stop people from forgetting about it.”

Miyako is one of the increasing number of local governments hit hard by the 2011 Great East Japan Earthquake and tsunami that have started to offer “intangible gifts” through the furusato nozei.

The program allows taxpayers to donate part of their residential taxes to a local government of their choice, such as their hometowns.

Many municipalities give a gift, such as local specialties, to donors as a token of gratitude for increasing their tax revenue.

However, six of the 42 local governments hit by disasters, mainly in the coastal areas of Iwate, Miyagi and Fukushima prefectures, offer programs related to the disaster as intangible gifts.

These presents provide opportunities to listen to storytellers and tour the remnants left after the earthquake and tsunami.

Tagajo city in Miyagi Prefecture in January added a March 11 storyteller tour to educate about the tsunami devastating the city to a list of about 70 gift items, including ox tongue and braised whole shark fin.

The gift encompasses a guide-led sightseeing tour of a 4.6-meter high monument, as tall as the tsunami that engulfed the city.

“We have to leave the message to future generations about a once-in-1,000-years disaster,” said Toshio Sato, department chief of Tagajo's city economy. “We would also like to increase the number of tourists and visitors.”

According to operators of the hometown tax program websites “Furusato Choice” and “Satofuru,” experience-based gifts are attracting growing attention across the nation.

For example, Kasagi town government in Kyoto Prefecture provides a tour of sites of the ascetic practices with the chief priest of the temple for hometown tax donations of 8,000 yen.

The number of such gift offerings increased by one and a half times in 2019 compared to the previous year.

However, the experience-based gifts involving the disaster are still not widely known.

Otsuchi town in Iwate Prefecture has provided a storyteller tour with a wood chopping event since 2017, and Yamamoto town in Miyagi Prefecture also has provided made-to-order and experience-based tours in the disaster area since the same year.

But both municipalities still have not received any applications for their programs.

“The experience-based gifts are different from ones in which they just send via the mail," said an Otsuchi official. "Such a gift can give taxpayers more opportunities to learn more about the town. We would like to make such an accomplishment.”

Ishinomaki city in Miyagi Prefecture offers a package tour that includes an accommodation and a storyteller taxi tour around the disaster-hit areas for a taxpayer donation of 100,000 yen.

Some local governments devastated by the disaster are also considering offering gifts other than ones related to the disaster.

For example, Minami-Soma officials in Fukushima Prefecture hope to take advantage of their coastline, which attracts surfers and also is a site for world surfing competitions.

“We would like to consider surf tourism as a part of the project to use the local resources," said a Minami-Soma official.

Iitate village in the prefecture where an evacuation order was issued following the accident at the Fukushima No. 1 nuclear power plant is considering offering a farming experience as a gift.