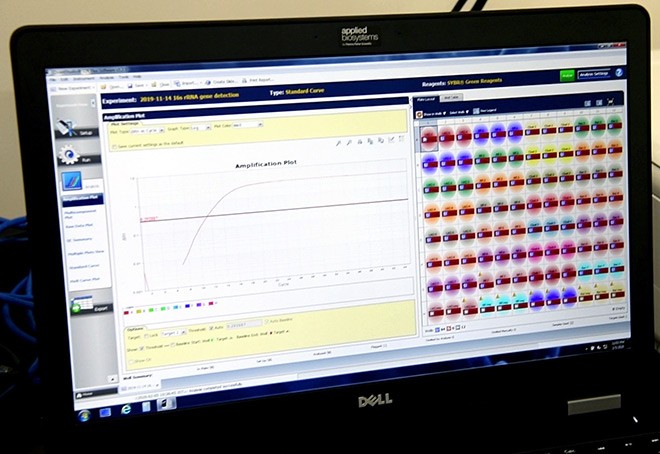 A device that tests for new coronavirus infections at the Hyogo Prefectural Institute of Public Health Science in Kakogawa, Hyogo Prefecture (Kenta Sujino)

A woman in the Kanto region felt a sense of panic after developing a fever in late January, when a mysterious new virus was rapidly spreading across the Chinese city of Wuhan.

She was involved in transporting cargo at an airport and suspected she may have caught the virus from Chinese tourists who had arrived there from Wuhan.

But after she followed the health ministry’s recommended procedures, a public health center rejected her requests for coronavirus tests for herself and her feverish 1-year-old son.

“I don’t know if they will ever test us,” the 36-year-old mother said a month after coming down with the fever.

While the woman expressed desperation, others have vented anger and frustration toward the government over its rigid rules on testing for the virus.

The health ministry’s testing guidelines are in place to give top priority to those who appear to have developed COVID-19, the disease caused by the novel coronavirus, before it becomes too late.

However, many people with fevers and coughs are still being denied the tests, even after their doctors have urged the local public health centers to conduct the checks.

Health minister Katsunobu Kato, whose ministry has come under international criticism over its quarantine measures on the virus-infected Diamond Princess cruise ship, offered no quick solutions.

An opposition party legislator at the Lower House Budget Committee on Feb. 26 asked Kato why health authorities were rejecting test requests from doctors.

“We are looking into what are the stumbling blocks,” he said.

The Ministry of Health, Labor and Welfare set up a number for telephone consultations concerning possible infections. The Kanto mother called that number and was advised to contact a local public health center.

The center refused to test her, citing a “low risk of infection.”

The woman called the center again when her son came down with a fever in the middle of this month. But an official at the center said the boy was ineligible for a test because he had not run a fever of 37.5 degrees or higher for four straight days.

When the mother took her toddler to a pediatric clinic in the neighborhood on Feb. 25, a doctor said the symptoms appeared similar to those of COVID-19 and prescribed regular medicine for the boy.

The doctor also promised to urge the public health center to test the boy if his condition does not improve.

Initially, the ministry limited the tests to people who had been in Hubei province, whose capital is Wuhan, or had come in close contact with people from that area.

On Feb. 17, the ministry expanded the scope of testing to cover people with pneumonia who require hospitalization and display prolonged fever and respiratory symptoms. The tests are also conducted on people who are regarded as highly likely to be infected based on a doctor’s assessment.

Still, outrage is growing that people in urgent need of diagnoses are being denied access to the tests.

Yoshio Otani, a doctor of respiratory diseases and head of the Ikebukuro Otani Clinic in Tokyo’s Toshima Ward, said he is infuriated by the inflexibility of health authorities.

He said a patient in his 60s showed up at the clinic earlier this month in such a severe condition that he needed an oxygen inhaler. The patient said he had also been running a fever topping 37.5 degrees for more than 12 days.

Otani contacted a public health center, but it would not test the man.

“The patient should be tentatively admitted to a hospital and wait there,” Otani quoted a center official as saying in response to his request for a test. “If his condition deteriorates, we will talk to the Tokyo metropolitan government into allowing him to be tested.”

Currently, a polymerase chain reaction (PCR) test is the only way to check for the coronavirus in patients in Japan. The test is fully financed by taxpayer money.

Wuhan, with a population of 11 million, has the capability to diagnose 20,000 people a day, city officials said at a Feb. 21 news conference.

Health authorities in South Korea said that in early February, they could conduct about 3,000 tests daily at 124 public health centers and 46 private medical institutions across the country.

But that figure appears to be only 25 percent of full capacity.

Up to 3,800 people a day can be tested in Japan with cooperation from the National Institute of Infectious Diseases, local public health institutes, private-sector testing services and universities, according to the government.

The Japan Medical Association, a public interest organization of doctors, plans to urge the government to improve the situation by gathering data on doctor-recommended tests that have been rejected by public health centers.

With all signs pointing to a further rise in the number of coronavirus patients in Japan, the ministry is preparing to have testing covered by the national health insurance program, possibly next week.

That will allow those showing symptoms to be tested based solely on the judgment of doctors at medical institutions.

Those tested will be required to pay 10 to 30 percent of the fee.

According to the health ministry, 877 coronavirus cases were confirmed in Japan as of 9:30 p.m. on Feb. 26, including seven people who have died.