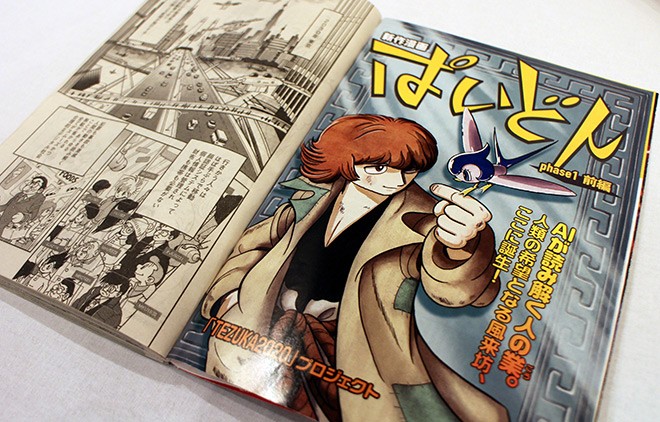 “Paidon,” created with AI that learned from Osamu Tezuka’s works, is carried in the Morning weekly manga magazine published on Feb. 27. (Yusuke Kato)

Legendary “Astro Boy” manga author Osamu Tezuka (1928-1989) has been given a new life via an artificial intelligence program that studied his works and came up with a new one.

The tale, set in Tokyo in 2030, follows the exploits of a homeless philosopher named Paidon.

After turning his back on the highly controlled society in which he lives, Paidon devotes himself to investigating and solving crimes.

“The new work is just like the world of Tezuka,” said Makoto Tezuka, Tezuka's son, at a ceremony held to introduce “Paidon” on Feb. 26.

“AI is still developing, but it 's a useful technique for taking manga culture into the future,” added Makoto Tezuka, who sits on the board of Tezuka Productions Co.

The AI program came up with the rough story, protagonist and original ideas for character designs.

Human animators who filled in the story's details drew the illustrations.

“Many people are worried about AI, but in our project, it can support humans, not be a threat to replace us,” said Keio University professor Satoshi Kurihara, who participated in the project.

Semiconductor company Kioxia Holdings Corp., formerly Toshiba Memory Holdings Corp., and Tezuka Productions proceeded with the project under the concept, “If Osamu Tezuka were still alive and creating his manga, what would he make?”

Tezuka, often called “the god of manga,” is known for a slew of hit manga including “Phoenix” and “Black Jack.”