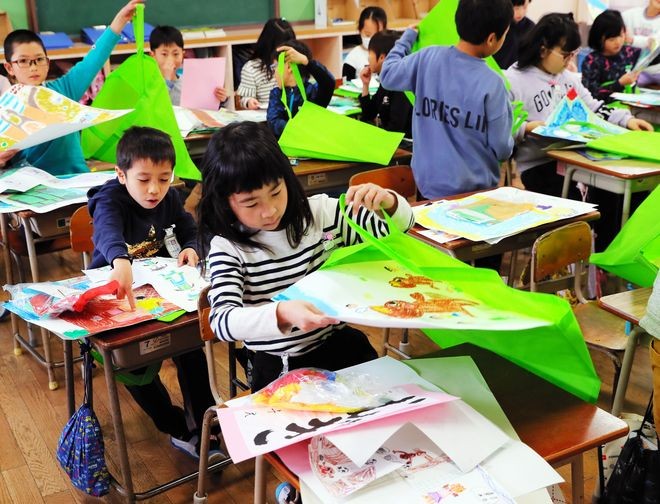 Second-grade students at Nishi Kokura elementary school pack their school materials in bags to prepare for the cancellation of classes on Feb. 28 in Kita-Kyushu, Fukuoka Prefecture. (Jun Kaneko)

As the coronavirus epidemic in Japan continues to spread, Prime Minister Shinzo Abe made a sudden announcement on the evening of Feb. 27.

Abe said the government will ask all elementary, junior and senior high schools in the nation to cancel classes from March 2 until their spring break, which runs through early April.

Schools are clearly a high-risk environment during a virus outbreak as many students spend long hours in closed, crowded spaces and eat lunch together.

Some experts have also voiced concerns that the virus students have caught at school could spread to other family members including the elderly.

The government of Hokkaido, where the number of cases has increased markedly, has decided to close all schools as an emergency measure that started on Feb. 27.

But Abe’s announcement came all too abruptly and could cause confusion and anxiety.

The question is how the decision was made. How did the administration evaluate the realistic risk of keeping schools open by using what kind of data?

The education ministry on Feb. 25 issued an official notice telling local governments to make their own decisions over whether, how many and how long schools in their areas should be closed by weighing the local circumstances and conditions related to the epidemic.

Abe promised that the government will take the responsibility to make effective responses to issues that might arise out of the step.

That is good to hear. But we were not told what specific problems the government is expecting to see and what specific measures it plans to take to deal with them. The administration needs to act swiftly and present a convincing plan to cope with possible repercussions from the measure that can ease anxiety among the public.

One-month blanket closures of all schools could cause immeasurable effects on Japanese families and society.

Two-income families with children in the lower grades at school will face especially heavy burdens.

Young children cannot be left alone at home. Some medical workers who are on the front lines of the battle against the virus epidemic will be forced to take days off to take care of their children.

Companies are also likely to see many employees absent from the office. It is unclear how they can mitigate the disruptive effects by taking such steps as allowing employees to work from home and adopting shorter or staggered working hours.

Hardest hit will be single parents with non-regular jobs. Many of them will feel at a loss as to how they can handle possible dismissal and reduced incomes.

The government should give instructions immediately to businesses to ensure that such vulnerable workers will not receive unfair treatment when they have to miss work or leave the workplace earlier than usual because of the school closures.

As Abe’s request will effectively force schools to close for a long period, the government is responsible for ramping up policy support to low-income families with young children.

Since the government on Feb. 26 officially requested event organizers to postpone, cancel or scale down large sporting, cultural and other public events for two weeks, many organizations have started taking action accordingly.

Many scheduled events have been canceled or downsized. Some sports events will be held without spectators.

This is an effective step to reduce the risk but will affect many part-time and other non-regular workers because such events usually involve hiring a large number of such workers. Some of them have already started talking about their economic hardships.

Measures to protect the safety of society often impose heavier burdens on the vulnerable. The government has a duty to develop and swiftly carry out policy measures to alleviate their suffering.