Abe adviser held dinner reception after experts advised not to 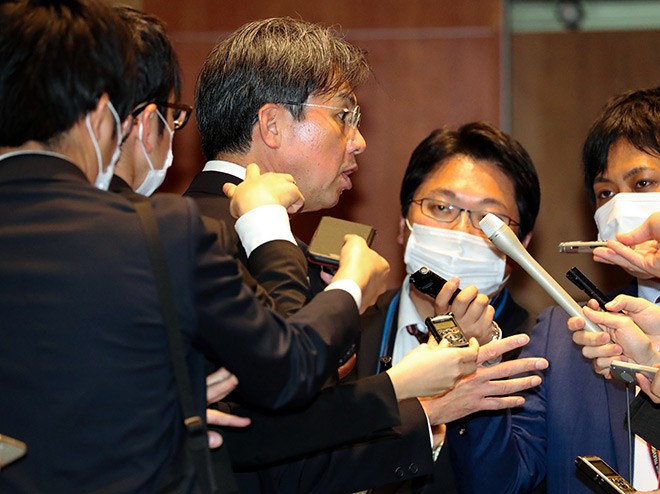 Opposition party lawmakers aren't taking a stand-up dinner reception held by an adviser to Prime Minister Shinzo Abe on Feb. 26 lying down, which came as the government is advising against such affairs during the coronavirus outbreak.

“To have a close associate of the prime minister ignore the various requests for cooperation made to the public shows that governance in the Abe administration has totally collapsed," said Akira Koike, an executive with the Japanese Communist Party, on Feb. 27. "I am dumbfounded.”

On Feb. 24, a government panel of experts issued a list of recommendations on how to avoid becoming infected by the coronavirus.

One is to avoid attending a stand-up dinner reception involving many people, especially if conversations are to be struck up with others only an arm’s length away.

The dinner reception was held by Kenya Akiba, a special adviser to Abe, and also a Lower House member representing a district in Miyagi Prefecture. The event was a political fund-raising party held in Sendai, the prefectural capital.

Abe has been making almost daily requests to the public, such as refraining from attending sporting and cultural events. On Feb. 27, he abruptly announced that the government would call on all schools in Japan to close from March 2.

Regarding why he went ahead with the party despite the calls from the prime minister to refrain from holding events, Akiba told reporters, “Canceling would have been an extremely difficult option in terms of logistics.”

Akiba added that so far no one in the six Tohoku prefectures, including Miyagi, had been infected with the coronavirus.

According to Akiba’s local office, the party was ostensibly held to mark the publication of a book by the politician. The event began at 6 p.m. and about 200 people attended.

Alcohol disinfectant was made available at the party venue, and the event itself was shortened to an hour.

Defense Minister Taro Kono had been invited as a special speaker but he canceled.

Abe did not respond directly when asked on Feb. 27 about the party by reporters.

(This article was written by Naoki Kikuchi and Ryo Toyoka.)