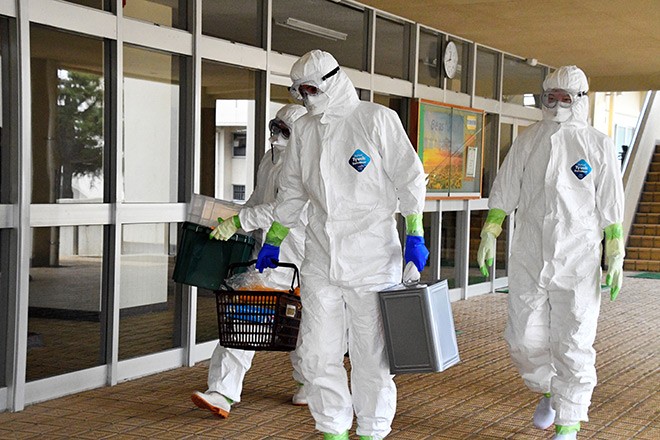 Workers sanitize a junior high school in Kanazawa, Ishikawa Prefecture, where a student was confirmed infected with the new coronavirus on Feb. 23. (Rina Horikoshi)

Teachers and parents were thrown into confusion by Prime Minister Shinzo Abe’s sudden and unprecedented request for all schools to close from March 2 to prevent the new coronavirus from spreading further.

Educators say they are now at a loss on what to do concerning grades and once-in-a-lifetime events for their students as the final semester winds down in March.

Angry parents said Abe’s surprise move showed that the government is out of touch with the realities facing working mothers and fathers.

The prime minister on Feb. 27 urged elementary, junior high and high schools, as well as special-needs schools, to shut down until the start of spring break in the latter half of March.

“It was made with too short of a notice,” a principal of a public high school in Tokyo said. “We can’t grade our students unless they take the end-of-term examination, and we also planned to have a graduation ceremony.”

The school had earlier decided to hold the final exam from noon to 4 p.m. on March 2 so that the students can avoid rush-hour commutes and possible infections.

“We managed to set our own measures, but we may have to start all over again,” the principal said. “We might be able to give grades based on past test results, but this is a pity for the students.”

A principal of an elementary school run by a Tokyo ward said he was unsure of what to do after hearing Abe’s request.

“We have many events in spring, such as graduation and enrollment ceremonies. I have no idea what will happen,” he said.

A special-needs teacher in her 40s at a city-run elementary school in Tokyo said she felt that Abe’s request was just a political stunt.

“I feel that the government decided to close schools as a ‘performance,’ knowing that the economic impact would be small,” she said.

Although her child’s private high school is temporarily closed, she said she still sees students gathering at a theme park.

“It can’t be helped that schools are closed in areas where the number of infected patients continues to increase,” she said. “But I doubt whether it is meaningful to shut down schools in other areas. It would be easier if schools themselves could manage the children by taking their temperatures and ensuring they wash their hands and gargle.”

A visibly angry 41-year-old woman in Tokyo’s Nakano Ward said of Abe’s request: “It is too sudden and irresponsible.”

She and her husband both work while raising two daughters, a second-grader and a sixth-grader at elementary school.

The mother said she is on duty next week and cannot work from home. She said she thought about sending the children to their grandparents’ house in a rural area but dropped the idea after considering the possibility that the girls could become infected during such a long way from home.

“I wonder if the government thinks it is OK to leave children at home alone for long hours,” the mother said. “What’s the point of closing schools if parents are still commuting in packed trains? I don’t think (Abe’s) decision was made based on careful consideration.”

But one parent in Fukuoka’s Chuo Ward, with two daughters in elementary school, was pleased by Abe’s request.

“I hoped that the school would be closed early,” the 41-year-old full-time homemaker said. “I feel relieved as a parent knowing they don’t have to go to crowded places.”

The Kyoto municipal board of education on Feb. 27 held an emergency meeting with executives of the city’s elementary, junior high and high schools as well as special-needs schools.

The board decided that March 2, a Monday, will be a normal school day. It said it will make a decision on what to do for March 3 and beyond based on the situation at each school.