Abe: Parents who have to take off work can qualify for subsidies 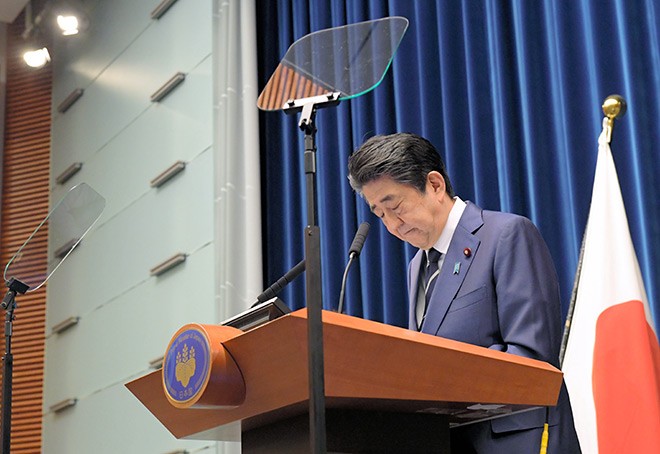 Seeking cooperation from the public, Prime Minister Shinzo Abe explains his call for closure of schools nationwide to rein in the spread of the new coronavirus infection at a news conference on Feb. 29. (Pool)

Prime Minister Shinzo Abe on Feb. 29 announced emergency programs to soften the financial blow to parents and employers following his abrupt call for nationwide school closures to stop the spread of the new coronavirus.

At his first news conference on the issue, Abe acknowledged that school closures would cause people “enormous burdens,” but asked for public understanding by underscoring the need to contain the outbreak.

The news conference followed Abe's request on Feb. 27 for closing elementary, junior high, high and special schools across the nation from March 2.

But his call immediately caused turmoil among parents, local authorities and businesses as the prime minister did not mention measures to alleviate the financial impact and other problems arising from school closures.

Abe defended his request, saying, “I couldn't afford to waste any time before making the decision.”

The closure would affect 13 million schoolchildren.

Many parents are expected to take off work to look after their children and face a sharp drop in income as a result. Businesses may be forced to shut down some operations with fewer employees showing up.

More children will have to spend time at community centers and other venues if their parents cannot take days off.

With respect to assistance to parents, Abe said "a new subsidies program will be established" to help them make up for reduced incomes due to staying at home to take care of their children.

Abe also said the central government will assist local governments in offering programs to look after children if their parents cannot be at home while schools are closed.

In addition, the central government plans to provide subsidies to employers if they retain regular and non-regular employees on their payroll even after a decline in business performance.

Abe said the central government will compile a second package of assistance measures in the next 10 days or so.

But he did not explain why he asked for a blanket closure of schools and how effectively the step could contain infections.

The prime minister acknowledged at the news conference that he had not sufficiently explained about how the central government is tackling the coronavirus issue.

He spoke on the question during meetings of the Diet and of a government task force formed to address it since the infection was confirmed in Japan. He spoke briefly to reporters on four occasions, including when they waited for him to comment on the death of a patient of COVID-19.

But he had never directly addressed the public until the news conference on Feb. 29.

Despite Abe’s pledge to offer financial assistance to parents, Chiba Mayor Toshihito Kumagai criticized Abe’s speech as a one-sided “address” in which he mentioned only what he wanted to say.

“Prime Minister Abe, there is nothing wrong with delivering an address, but please give more details promptly about guaranteeing incomes,” Kumagai said on his Twitter account after the prime minister’s news conference.

Kumagai also expressed concerns about the health of children who will gather at school classrooms or community halls to spend time if their parents cannot look after them while their schools are closed.

“If children are packed into such venues from morning, their risk of becoming infected by the virus will increase,” he said.

An official close to the prime minister’s office expressed disappointment over Abe’s news conference, comparing it with one held by Hokkaido Governor Naomichi Suzuki on Feb. 28 where he issued a state of emergency for Hokkaido.

Suzuki, donning a mask and showing graphics, explained why he decided to declare a state of emergency for three weeks.

“I did not feel a sense of urgency about the prime minister’s news conference as much as I did about the Hokkaido governor's,” the official said.

Turning to the planned visit to Japan by Chinese President Xi Jinping in April, Abe said, “at this stage there is no change in the plan.”

But he did not rule out the possibility of the trip being postponed, saying that the two countries “need to achieve satisfactory outcomes” through the Chinese leader’s visit.

As a state guest, Xi is expected to meet Emperor Naruhito.

As for the Tokyo Olympics and Paralympics, which start in late July and late August, respectively, the prime minister said officials are preparing thoroughly for the sporting events.