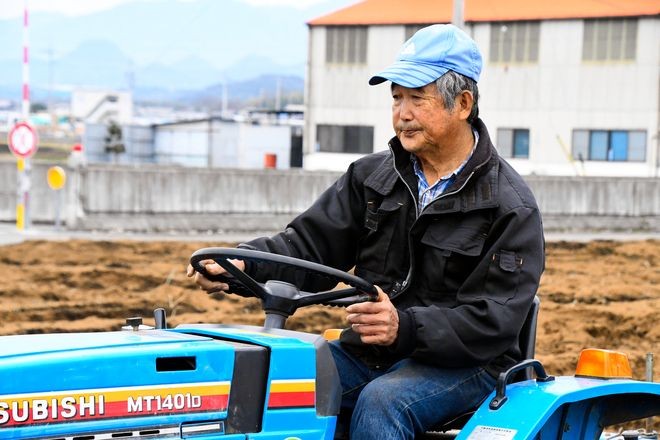 MINOKAMO, Gifu Prefecture--Minoru Motomatsu has struggled to make ends meet with his farming business here, and his latest harvest has been devastated by frost.

But the job is far more enjoyable than the higher-paying factory work that he once did, Motomatsu, a second-generation Japanese-Brazilian, said.

Motomatsu and his fondness for farming may represent an untapped source of labor for Japan’s increasingly deserted farms.

“Many Japanese-Brazilians are interested in agriculture,” said Kumiko Sakamoto, director of Aidensha, a nonprofit organization based in Suzuka, Mie Prefecture, that supports foreigners.

“They might be able to help fill the lack of Japanese farmers here, although there are still things to overcome, such as how to gain a stable income and how to borrow farmland.”

Sakamoto had lived in Brazil.

Motomatsu, 71, left the country about 30 years ago for factory work in Japan as a “dekasegi” migrant.

With the economic situation in Brazil unstable at that time, Motomatsu decided to take advantage of Japan’s revision of the Immigration Control and Refugee Recognition Law in 1989, which eased the entry of Japanese descendants and allowed them to work as unskilled laborers.

Motomatsu came to Japan alone, leaving his wife and four children in Brazil.

He worked at a car parts factory in Hamamatsu, Shizuoka Prefecture, and plants in Yokohama and Seki, Gifu Prefecture.

“The salary was good,” he recalled. “But it was heavy physical work, and I had to stand the entire day.”

After eight years, he was able to bring his family to Japan.

About 10 years ago, he quit his factory work and started growing South American vegetables at his farm in Minokamo.

Many foreign residents live in the city. And Motomatsu has delivered his goods to Japanese descendants living in the Tokai region.

He uses Facebook to promote sales, posting such comments as, “Hello, I will sell cassavas on Saturday.”

Some customers ask how many kilograms of vegetables will be available. One even asked if he could bring his produce to Iwakura in Aichi Prefecture.

His customers usually post in Portuguese. And he does deliver his vegetables both within and outside Gifu Prefecture by mini truck.

He lists the areas for deliveries and the vegetables he plans to sell, such as cassava, a source of tapioca, beets and lettuce.

During the harvest period in early summer and autumn, customers visit Motomatsu’s farm to shop.

“His vegetables are fresh, and their colors are beautiful.,” said Victoria Shimazu, 62, a third-generation Japanese-Peruvian who lives in Toki, Gifu Prefecture. “They are the same as what I bought in my home country.”

Motomatsu focuses on organically grown vegetables, but his annual sales are only about 1.5 million yen ($13,600).

“I can’t make much money, but I enjoy it,” he said. “Working at factories was very tough.”

Another benefit from his farming work is how he developed a sense of community.

Motomatsu sometimes holds barbecue parties at his home and offers just-harvested vegetables to his friends who also work in the agricultural industry.

Born and raised in Sao Paulo, Motomatsu learned about farming from his parents, who had grown rice in Kumamoto Prefecture before migrating to Brazil during the Pacific War.

Motomatsu’s vegetable growing started with a family garden near his apartment in Minokamo. He wanted to give his family members a taste of their home country so that they would not forget their roots.

He now rents 2 hectares of farmland and works the land with his wife, a 60-year-old Japanese descendent whom Motomatsu calls “Okkaa” (mother). But the couple has experienced difficulties.

“I can’t do well at all this year,” Motomatsu said in front of his cassava crop in December. The frost had turned the inside of the roots black, and he was unable to sell them.

However, Motomatsu said he will persist with his agricultural work: “I want foreigners in Japan to remember their hometown’s tastes and work hard.”

According to the farm ministry, the number of foreign workers in the agriculture industry nearly doubled over five years to 31,000 as of the end of October 2018. Among them, about 90 percent were foreign technical intern trainees.

The specified skills visa, which took effect in April 2019, is expected to increase the number of foreign workers on farms.

Meanwhile, many Japanese-Brazilians, like Motomatsu, who arrived in Japan as dekasegi migrant laborers have also turned to farming in their advanced years.

They have potential successors from their home country.

Families living in the suburbs of Sao Paulo reportedly tend to have small farms, and many family members obtain basic agriculture knowledge at an early age.

Although the number of foreign workers at farms has increased in Japan, agriculture industry groups estimated that the country was short about 70,000 farmers as of the end of 2017.

The Japanese government says foreign farmers are needed to maintain and develop agriculture production base as the workforce rapidly ages.

But the government has not grasped the entire picture of the foreign agricultural workforce, except for the foreign technical intern trainees.

(This article was written by Shino Matsuyama and Hideaki Sato.)