EDITORIAL: Abe has failed to sell the public on his plans to combat the virus 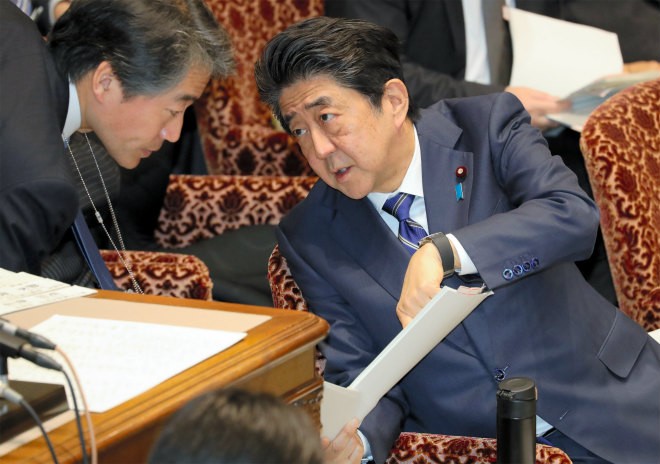 Prime Minister Shinzo Abe, right, consults with an aide over his response to Tetsuro Fukuyama, secretary-general of the main opposition Constitutional Democratic Party of Japan, at an Upper House Budget Committee meeting on March 2. (Takeshi Iwashita)

Prime Minister Shinzo Abe has yet to convince the public that his plans to battle the coronavirus epidemic, including nationwide school closures, will work.

His explanations about the plans and the measures themselves are insufficient to allay the people's fears and win their support.

As he has described his call for schools across the nation to cancel classes until the spring break as his own "political decision," Abe is responsible for spearheading the policy efforts to ensure effective, carefully tailored responses to the crisis.

At the outset of a March 2 Upper House Budget Committee, Abe explained the measures his administration is taking to contain the outbreak, especially his request for all elementary, junior and senior high schools in Japan to close from March 2 until the spring break, and asked for bipartisan cooperation to implement them steadily.

The guiding policy principles for tackling this public health care challenge announced by the government on Feb. 25 said that it was up to prefectural authorities to ask schools in their jurisdictions to suspend classes if necessary.

Only two days later, however, Abe decided to call on all schools to close from March 2. There was only one weekday for preparations for the measure. The surprise announcement caused great dismay and confusion among teachers, parents and many workplaces.

It was an unusual and radical step that would inevitably cause profound, far-reaching impacts on people's daily lives. Under pressure to explain the measure directly to the public, Abe belatedly held a news conference on the matter over the weekend.

He sought to seek public support for the measure by stressing that the next one to two weeks would be "crucial" for the trajectory of the epidemic. But he offered no convincing reason for asking all schools around the nation, including those in prefectures without any confirmed case, to suspend classes.

At the Budget Committee session, Abe admitted that the decision was not backed by solid science, saying he had not consulted with experts over the move.

Equally unclear are the reasons for exempting from the measure kindergartens, day nurseries for preschool children and after-school child care centers.

As Abe defended this exemption by saying young children should not be left alone at home, an opposition lawmaker asked whether these child care facilities are at lower risk of exposing children to the virus than schools.

The chairman of the government's expert council on the epidemic responded to the question by saying no risk comparisons had been done.

At news conferences as well as in Diet sessions, Abe tends to repeat prepared statements again and again. He has shown little willingness to make careful and sympathetic responses to the people's anxiety about the situation.

He ended the questioning at the belated news conference after only 35 minutes and went home even though there was no scheduled official business to follow.

Abe did not take any strong disciplinary action against Kenya Akiba, a special adviser to the prime minister and a Lower House member representing a district in Miyagi Prefecture, for holding a stand-up dinner reception in Sendai, his electoral district.

Akiba held the fund-raising party on the day when Abe urged the public to refrain from holding large-scale events attended by many people.

Abe only gave Akiba an "admonition" and flatly rejected opposition demand for dismissing the adviser.

If the government asks the public to endure inconvenience and discomfort to help combat the virus, Abe and his aides should set an example by behaving accordingly.

When the nation was struck by the Great East Japan Earthquake, a devastating disaster, in 2011, the Liberal Democratic Party, the current ruling party that was then in opposition, worked with the government led by the Democratic Party of Japan to deal with the aftermath.

The LDP and the DPJ enacted a number of lawmaker-drafted bills through active bipartisan talks.

The ruling and opposition parties naturally need to join hands in responding to such a crisis that is threatening the lives and livelihoods of people.

But such cooperation between the ruling and opposition camps is only possible if the administration is open to giving sincere consideration to opposition criticism and proposals.

To ensure the effective political leadership transcending partisan politics that is required to deal with the crisis, the Abe administration needs to demonstrate the humble willingness to seek cooperation from the opposition bloc it has lacked so far.