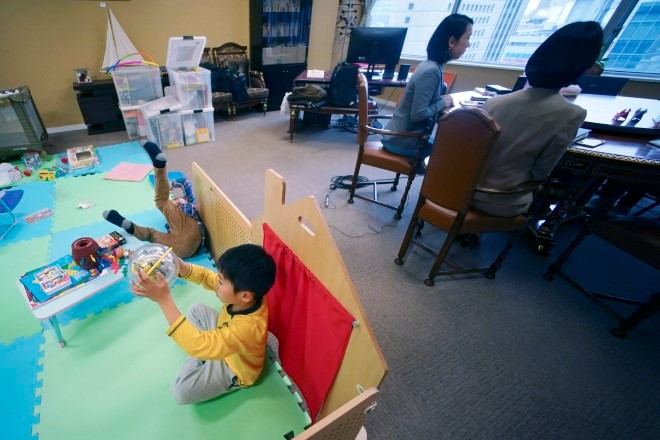 Keiko Kobayashi and Sachiko Aoki, both employees of the staffing services company Pasona Inc., work as their children entertain themselves at the company’s headquarters on March 2 in Tokyo. (AP Photo)

Keiko Kobayashi brought her 7-year-old son to her Tokyo office on Monday after his school, like most others in Japan, suddenly closed for four weeks in a government effort to slow the rapid spread of the new virus. She was lucky--her employer agreed to let them temporarily share an executive office with another mother and child.

“I was shocked by the news of the school closures, and thought, what should I do?” said Kobayashi, a senior manager at a multinational staffing service provider. “There was no explanation of how this is going to work.”

In a country where nannies and babysitters are uncommon and mothers are still expected to be responsible for child rearing, the measure is forcing many employed mothers to limit their working hours. The situation is even harder for single parents and those with children who have disabilities.

Prime Minister Shinzo Abe announced a plan last Thursday to close schools across Japan from Monday until the end of the month. He said the coming period is critical in determining whether Japan can take control of the outbreak. Nearly 1,000 people, including 706 on a quarantined cruise ship, have been infected in the country and 12 have died.

The school closures come near the end of Japan’s academic year, leaving little or no time for final exams or graduation ceremonies for the country’s 12.7 million students.

Kobayashi said she is still exploring various options, including sending her son to a public daycare center for part of the day, or trying to work from home more often.

“But if I work from home, my son has TV and a lot of undesirable temptations when I’m not watching him,” she said. “Creating an environment where he can concentrate on his study will be a challenge.”

Abe excluded daycare centers and after-school clubs from the school closures to help parents with preschoolers or others who cannot get off work early enough, triggering questions about the effectiveness of the shutdowns.

“Honestly, I doubt if the closures can be effective,” said Sachiko Aoki, the colleague who is sharing the office with Kobayashi. She said she is reluctant to send her child to a daycare facility because they’re likely to be packed with children who could have the virus.

Critics also note that children appear to be far less likely to test positive for the virus and say the government should focus instead on the elderly and infirm who account for most of the deaths.

According to the World Health Organization, of more than 44,000 patients in China with confirmed infections, only 2.1 percent were below the age of 20.

A member of a government-appointed panel defended the decision on Monday, saying that young people without symptoms might pass infections on to older people.

Mika Nakajima, a museum employee and single mother with a 15-year-old autistic son who is sensitive to noise and people around him, said she has already used up her paid vacation days to take care of her aging parents and her son late last year, and is on the verge of losing her job.

At age 47, Nakajima says she has no hope of finding another full-time position if she’s fired.

“So I’m desperate, I really cannot lose this job,” she said.

“It’s a difficult time for families with ordinary children, but it’s much harder for those who have children with disabilities or who need attention and care,” Nakajima said. “Some other forms of support are needed.”

Kozue, the mother of a second-grade girl who asked to be identified by only her given name, said she is more afraid of losing her job than of the virus. A contract worker at a major company, she can get time off but without pay. Her employer agreed to allow her to work from home until the end of next week, but after she may have to send her daughter to stay with her elderly parents in Nagano in central Japan, she said.

Office worker Megumi Aoki said she has been working from home two days a week but has to find someone to take care of her two elementary school children for the rest of the week, or take those days off without pay. She said that’s an option because her husband has enough income to support the family, but it would be a setback for her career.

“I think the measure was set up because of the assumption that someone, most likely mothers, is at home to take care of the children, and we became easy targets,” she said.