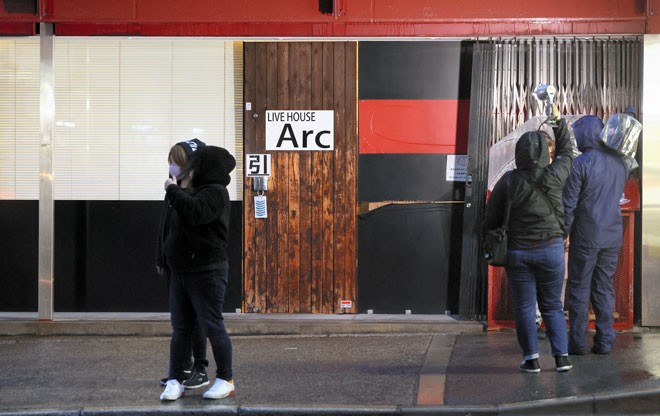 Four people who were at a live concert at the Osaka Kyobashi Live House Arc in Osaka’s Miyakojima Ward in February have tested positive for the novel coronavirus. (Taku Hosokawa)

Health experts are urging young people to change their social lives because they are more likely to brush off symptoms of the new coronavirus and enter high-risk venues where they may unknowingly infect others.

The experts said people should definitely avoid poorly ventilated places like gyms and live houses where the virus can easily spread.

The new coronavirus, which causes the COVID-19 disease, has continued its advance across Japan.

Eighteen newly confirmed infections were reported on March 2, bringing the total number in Japan to 980 as of 10:30 p.m.

Among the new cases, five each were in Hokkaido and Kanagawa Prefecture, followed by four in Niigata Prefecture, two in Osaka Prefecture, and one each in Ehime and Kochi prefectures.

In Hokkaido, which has declared a state of emergency over the outbreak, 77 COVID-19 patients have been confirmed. Twenty percent of them are between the ages of 10 and 39.

However, health experts suspect the actual number in Hokkaido could be 10 times the official figure. They noted that many people who have tested positive elsewhere in Japan had recently visited the northernmost main island.

SAY ‘NO’ TO CLUBBING

“There is no evidence that COVID-19 has spread widely among young adults, but we are at a loss to explain the situation if that is not the case,” Hitoshi Oshitani, a professor in virology at Tohoku University and a member of the government’s panel of experts for the coronavirus crisis, said at a news conference on March 2.

Oshitani said one likely starting point of the contagion’s spread in Hokkaido is when young adults gather at high-risk locations in urban areas and become infected with the disease. But since their symptoms are minor, they do not visit hospitals and instead continue to move to different areas in Hokkaido and infect others, particularly elderly people who are more likely to develop severe symptoms.

An analysis of domestic COVID-19 patients showed that 80 percent of them have not infected other people.

But when an infected person, for example a young person, spends a certain amount of time in an indoor and enclosed space and stays close to others, a “cluster” can be created, Oshitani said.

The major causes of coronavirus infections are person-to-person transmissions of droplets from coughing and sneezing, and the touching of mouths and noses with virus-contaminated hands.

However, experts said the virus can spread through another route.

Even if an infected person does not cough or sneeze, the novel coronavirus can still be emitted and float around in the air in a poorly ventilated place and infect a healthy person.

A 21-year-old university student in Sapporo who was shopping near JR Sapporo Station said he usually hits a club in the city’s nightlife district of Susukino about once a week.

But he said he has abstained from clubbing over the past two weeks.

“I heard that young people are less likely to develop symptoms, so I’ve watched myself, trying not to infect other people,” the student said.

Not all his friends are so careful.

He said some have said on social media, “It’s all right as long as I take care of my health” and, “At a time like this, we need to do something fun.”

The government’s panel of experts led by Takaji Wakita, head of the National Institute of Infectious Diseases, has urged people to avoid clubs, citing a cluster of infections that apparently started at the Osaka Kyobashi Live House Arc in Osaka’s Miyakojima Ward.

About 120 people, including musicians and audience members, packed the closed and confined space at the club for a live concert held on Feb. 15.

Two men in their 40s in Osaka Prefecture who worked for the concert and a woman in her 30s from Kochi who attended the show tested positive for the novel coronavirus.

One of the men was confirmed to have COVID-19 when he was in Sapporo on Feb. 25.

Osaka Governor Hirofumi Yoshimura told reporters on March 2 that the live concert was a possible source of the spread of COVID-19.

“We cannot have another cluster again,” Yoshimura said.

The Osaka prefectural government said it has received 36 inquiries about the coronavirus. It has also asked the health ministry to dispatch experts to the prefecture to take measures to prevent another cluster.

The local government is now conducting epidemiologic studies to check the health of people who attended the show.

In Ehime Prefecture on March 2, a woman in her 40s who went to the concert in Osaka tested positive for the new coronavirus.

Ehime Governor Tokihiro Nakamura said the woman “has no fever and shows no symptoms, like coughing, at all.”

The woman, feeling healthy, took an expressway bus to go home after the concert. She then went to work and even traveled by plane to the Kanto region.

The panel of experts said this underscores the dangers of the virus: Infected people who show light or no symptoms can still spread the disease to others.

The Ehime prefectural government has conducted a virus test on the woman’s two family members who live with her and 23 of her coworkers.

All of them have tested negative.

“The woman has had spring allergy symptoms and said she was wearing a mask while on the bus and the airplane,” Nakamura said.