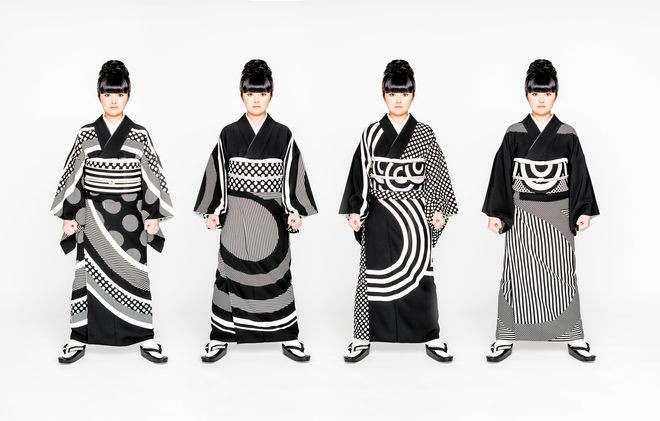 Designer Hiroko Takahashi’s kimono feature modern patterns and defy conventional views of the garment, but she says her success owes much to following customs and listening to traditional craftsmen.

Graceful circles and lines adorn the kimono she produces for both men and women. Photos of Takahashi wearing a kimono and standing with her feet apart reflect her intention to break with the idea that women should modestly walk pigeon-toed in the long-established attire.

Her mix of modernity and tradition stems from her many years of studying the garment industry.

Takahashi was born in Asaka, Saitama Prefecture, to a family that was good with its hands. Her father is a plasterer while her mother and grandmother have proved adept at dressmaking and knitting.

After watching a TV Tokyo Corp. program themed on fashion items, Takahashi decided to pursue a career as a clothing designer.

She enrolled in the clothes and accessories design course at Saitama Prefectural Niiza General Technical High School for a chance to train at a sewing company. She wanted to improve her sewing skills to a level at which she herself could produce commercially sold products.

She later majored in dyeing and weaving at Tokyo University of the Arts, where she first engaged in kimono design.

After receiving her diploma from the university’s graduate school, Takahashi started working at a major apparel company as a designer. But developing mass-produced items was not what she wanted to do, so she quit the job after half a year.

Takahashi said she decided that “thoroughly researching kimono will enable me to create things different from those made by designers outside Japan.” She returned to the graduate school to study the traditional attire.

When she set up her own kimono-producing company, her requests for fabrics were often rejected by craftsmen who were used to old-fashioned patterns. They said that her designs were not suitable for kimono.

Takahashi returned to studying. She exhaustively surveyed the craftsmen’s past works before making her orders, thereby improving communications with them.

“Novel products might be created through a lack of understanding of the techniques and skills used to design kimono,” Takahashi said. “But that more often than not makes it difficult to proceed smoothly.”

A reciprocal effect of her honest stance toward craftsmanship is that others make efforts to understand the intentions and techniques behind Takahashi’s designs.

Cooperation with craftsmen is also essential for Takahashi’s expanded range of products, such as “yukata” casual kimono, “furoshiki” wrapping cloth and porcelain.

“Restrictions offer an opportunity to develop fresh articles,” she said.

Takahashi’s kimono are currently drawing attention around the world. One of her creations is featured in the permanent collection of the Victoria and Albert Museum, which shows important design works and other artistic productions, in Britain.

Takahashi also plans to return to school. In April, she is scheduled to be appointed as a visiting professor at the Department of Industrial, Interior and Craft Design of Musashino Art University.

She said she will focus more on nurturing junior designers.