Rakuten to offer monthly service at ‘shocking’ rate of 2,980 yen 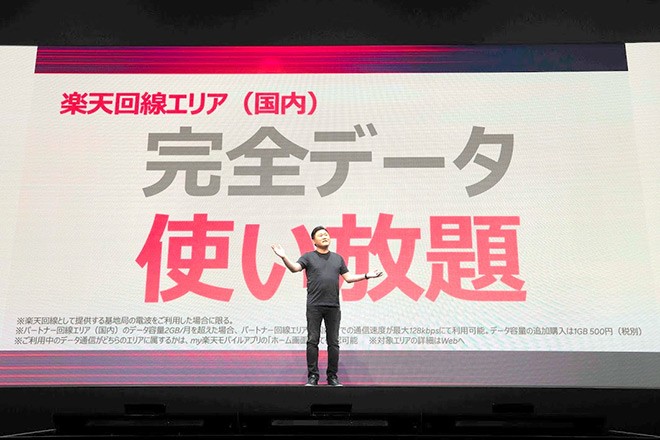 Hiroshi Mikitaini, chairman and CEO of Rakuten, explains the pricing plan during an online briefing March 3. (Provided by Rakuten Inc.)

Online retailing company Rakuten Inc. announced it will offer a full-fledged mobile phone service at a cut-price rate of just 2,980 yen ($27.70) a month from April 8, a move that undercuts the three other mobile phone giants by charging less than half of the current norm.

The fee, which excludes 10-percent tax, allows unlimited data transmission in areas where Rakuten has its own base stations: the 23 wards in Tokyo, the cities of Osaka and Nagoya, and some parts of Kanagawa, Chiba, Saitama, Aichi, Osaka, Kyoto, and Hyogo prefectures.

Voice calls in Japan will be free if callers use a dedicated app.

Rakuten Mobile Inc. began receiving applications to sign up for online contracts for the one-price plan from March 3 and at its stores March 4.

Hiroshi Mikitani, chairman and CEO of Rakuten, gave an online briefing March 3 to announce the setup, labeling it “a shocking price.”

Because other major mobile carriers offer various and complicated service plans, Rakuten Mobile looked to gain an edge in the market with a simple one-price package.

It will offer free service for 3 million users within the first year as part of a campaign blitz.

In areas where Rakuten has base stations, users will have access to unlimited data. But in areas where it piggybacks on the au mobile network, the data amount will be limited to 2 gigabytes per month. If a subscriber exceeds that amount, transmission speeds will automatically slow down, making it difficult to watch videos.

For those living outside areas covered by Rakuten Mobile, switching to Rakuten will not be easy.

Even in Rakuten’s zoned areas, it must piggyback on the au mobile phone network when users are underground or in building complexes. Thus, it has to pay a fee to au for such audio communications or data transmissions. For this reason, Rakuten set the limitation of usable data at a relatively low level.

Yoshihisa Yamada, representative director and president of Rakuten Mobile, said at the briefing that Rakuten is increasing its number of base stations at a much faster rate than it had envisaged.