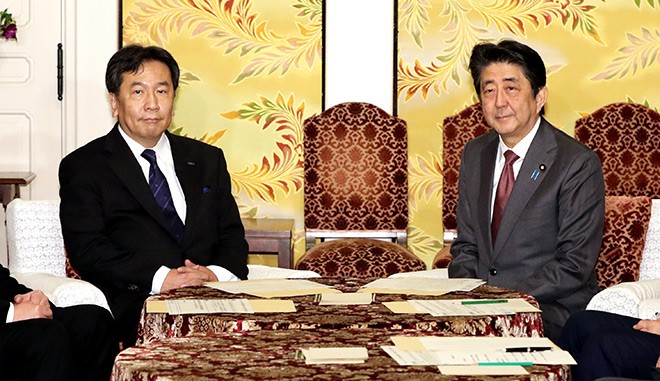 Prime Minister Shinzo Abe meets with Yukio Edano, leader of the opposition Constitutional Democratic Party of Japan, in the Diet building on March 4. (The Asahi Shimbun)

Prime Minister Shinzo Abe on March 4 asked the leaders of five opposition parties to help him enact legislation to deal with the novel coronavirus outbreak, which is rapidly morphing into a full-fledged public health crisis.

There is no disputing the need to take all possible measures to contain the spread of the disease, named COVID-19. But the government should offer clear descriptions about the systems to be created by the envisioned legislation and its political approach to implementing provisions for the public, along with having sufficient Diet debate.

The legislative initiative will sorely test the political integrity of the Abe administration, which has shown a tendency to avoid head-on debate on political issues and earned the distrust of the public by making deceptive responses.

Abe wants to enact a revision to expand the scope of a law that took effect in 2013 to cope with outbreaks of new types of influenza to give him more power to deal directly with the coronavirus epidemic.

The law was drafted to enable the government to make effective policy responses to eruptions of new flu viruses or unknown infectious diseases caused by highly pathogenic bacteria.

Since it is not suitable for dealing with the rolling crisis involving the new coronavirus that is highly contagious but does not cause serious symptoms in most cases, the Abe administration wants to tweak the law.

The law empowers the prime minister to declare a state of emergency under certain circumstances. The move would allow prefectural governors to urge people to stay at home and ask or order organizations to restrict events and use of public facilities such as schools and welfare facilities.

The governors would also have the power to secure use of land for opening emergency medical facilities and control transportation and sales of necessary products.

Abe is said to be considering making a state of emergency declaration, which would cause immeasurable effects on people’s lives and economic activity and weigh heavily on the nation’s collective psyche.

Resorting to this powerful policy tool requires an extremely cautious and mindful approach that precludes taking any chances.

The decision should not be made simply by Abe and his aides.

It is vital to avoid using any overblown estimate of damage that could be caused by the epidemic and base the math on solid science and experts’ opinions.

The government should also make the decision-making process transparent and visible to the public and fulfill its responsibility to explain it to the people. The accurate records of how the decision was reached should be kept and left for future evaluations.

The measures that involve restricting human rights must be limited to the minimum necessary.

These issues were all cited during the process of enacting the current law and addressed in provisions and supplementary resolutions.

But the way Abe has been tackling this public health challenge offers little reassurance.

Abe has announced drastic measures not included in the government’s basic policy for coping with the situation, including calling on businesses to restrict events and all elementary, junior and senior high schools to close across the nation, without consulting with the expert council advising the government on the matter.

No detailed records of the panel’s meetings have been kept. He has also been slow to work out measures to provide financial and other support to people who have to bear the brunt of the impacts of the sudden policy shift.

While stressing the importance of strong political leadership for responding to the crisis, Abe has often changed the nuances and tone of his remarks over related issues.

We feel compelled to describe Abe’s policy responses to the situation as miserably confused even if we acknowledge the treacherous nature of the crisis.

The proposal to declare a state of emergency raises many questions. Is this really a situation that demands this strong action? How can the government’s view that the next one to two weeks will be crucial for the trajectory of the crisis be consistent with the move to revise the law?

It is essential for the government to develop and explain well-tailored plans to combat the epidemic based on opinions of experts--not just in infectious diseases, but also in areas such as law, economy, education and social security.