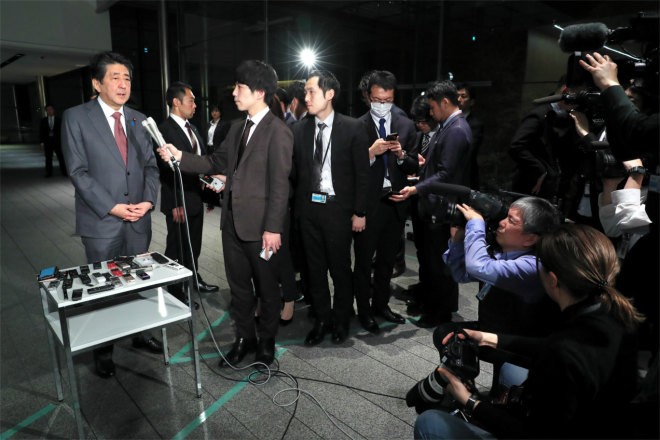 Prime Minister Shinzo Abe speaks with reporters on March 4 after his series of meetings with opposition party leaders. (Takeshi Iwashita)

Opposition party leaders indicated they were willing to discuss a legal revision designed to give the government greater authority to deal with the coronavirus outbreak, but they insisted the change was unnecessary.

In a rare move, Prime Minister Shinzo Abe met separately with the heads of five opposition parties on March 4 and asked for their cooperation in the Diet to revise the 2013 special measures law on combating new types of influenza so that it also covers the novel coronavirus.

Abe said he would include a two-year limit in the legislation on the power to declare a state of emergency. Such a declaration would allow prefectural governors to instruct residents to avoid unnecessary outings and to push for shutdowns of facilities, such as schools, day care centers and social welfare facilities for the elderly.

The opposition leaders did not oppose the proposed revision but said the special measures law already covers the coronavirus.

They also urged Abe to exercise caution about declaring a state of emergency, citing the impact the move would have on the daily lives of the public.

“It is the responsibility of the government to contain the outbreak so that there is no need to declare a state of emergency,” Yukio Edano, head of the Constitutional Democratic Party of Japan (CDP), told reporters after his meeting with Abe.

Komeito leader Natsuo Yamaguchi, who attended the meetings, indicated that a consensus had not been reached on whether the current situation in Japan requires such a declaration.

The government, which continues to face criticism over its response to the coronavirus outbreak, plans to submit the revision bill on March 10 for passage in the Diet next week.

Government sources said they believed the opposition leaders would not openly reject the legislation because such a refusal could be seen as an attempt to politicize a major health crisis.

The sources also said that having opposition lawmakers on board to revise the law could dilute public criticism about the potentially major restrictions that would be imposed on daily lives if Abe declared a state of emergency.

Edano and Yuichiro Tamaki, the leader of the Democratic Party for the People (DPP), said opposition approval in the Diet was unnecessary because Abe could already wield that power under the 2013 special measures law.

The law was enacted when the Democratic Party of Japan, to which both Edano and Tamaki belonged, was in charge of the government.

The law defines three major diseases as its target: new types of influenza; old influenza types that have re-emerged; and new infectious diseases.

“New infectious diseases” are defined as those for which established treatments for recognized contagions are not effective.

The CDP and DPP both argued that the novel coronavirus could be considered a new infectious disease under this definition.

However, the government has argued that a revision is needed because the novel coronavirus has been identified as causing a new type of pneumonia.

A member of coalition partner Komeito said the government wants to avoid using the 2013 law as it is because it could face criticism over why it waited so long to apply its provisions to deal with the coronavirus infections.

A CDP lawmaker at the March 4 Upper House Budget Committee session noted that the health ministry on Feb. 18 already revised guidelines of the existing law to allow the government to release the stockpile of face masks for distribution to hard-hit areas.