No fans or no play: Koshien baseball tourney thrown curveball 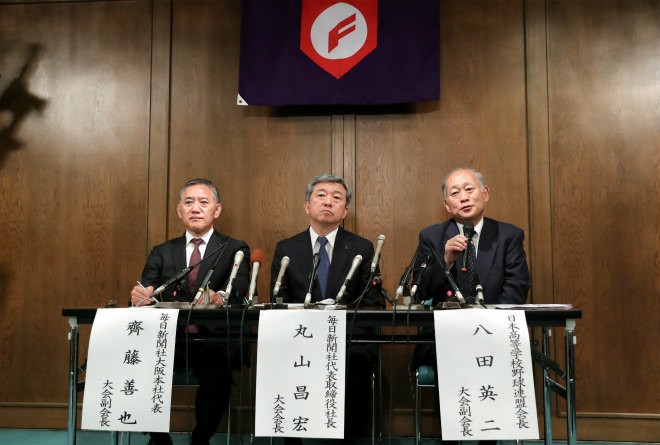 Eiji Hatta, right, president of the Japan High School Baseball Federation, gives a news conference in Osaka on March 4 with two officials from The Mainichi Newspapers Co. about the high school baseball tournament scheduled for this month. (Yuki Shibata)

Even without fans in the stands, Iwaki High School Principal Takehiko Abe is relieved that an upcoming national high school baseball tournament will be played, despite a spreading coronavirus infection.

The school in Iwaki, Fukushima Prefecture, received more than 60 million yen ($559,000) in donations from graduates since its team was selected for the National High School Baseball Invitational Tournament, commonly known as "senbatsu" (spring Koshien).

But the school had to cancel buses chartered to transport 3,000 people from Iwaki and elsewhere to root for the team.

“The organizers suggested a plan to hold a tournament without spectators, but I am relieved that children’s dream of playing in Koshien has not ended yet,” Abe said.

The officials are covering all the bases as they prepare to hold the prestigious tournament behind closed doors.

However, they may still strike out and be forced to cancel the tournament, depending on the spread of the virus in the country in the coming week and their ability to deal with the situation.

The tournament is scheduled to start on March 19 at Hanshin Koshien Stadium in Nishinomiya, Hyogo Prefecture, with 32 teams from across the nation.

The tournament is held during the spring recess before the new school year starts in April.

The championship without spectators would be the first in the history of the event, which began in 1924.

If the organizers decide to call off the tournament, it would also be the first time except for the cancellation during World War II.

They said most of the 32 schools expressed their intention to play at Koshien when contacted about the tournament.

At a news conference in Osaka on March 4, Masahiro Maruyama, president of The Mainichi Newspapers, said holding a tourney without spectators is a tentative decision to accommodate the wishes of many players.

“We want to allow them to play in Koshien as they have worked hard,” he said.

Maruyama said a tournament without spectators is one way of avoiding canceling the longstanding tournament while taking the necessary precautions against infection.

“We are reducing the exposure of students to each other and eliminating risk factors as much as possible,” he said.

In this context, they will pass up the opening ceremony in which all the teams assemble and march at the stadium.

The organizers also called for each school to minimize the number of school officials accompanying their teams. They are preparing antiseptic solutions to be used in and around the stadium.

Still, they acknowledged the option of canceling this year’s tournament is very much in play.

“Even without spectators, we will call off the tourney if we conclude that we cannot ensure the safety of those involved,” said Eiji Hatta, president of the federation.

The organizers will make a final decision on March 11 as it is the last day of a two-week period during which the public is urged to refrain from staging large events. The government made such a request on Feb. 26.

As many events have been canceled in rapid succession across Japan, school officials have held their breath as the popular tournament has not been ruled out yet.

“I am under the impression that they are working hard to hold the tournament,” he said.

This will be Obihiro's first time to play in the senbatsu.

More than 80 coronavirus infections have been confirmed in Hokkaido so far, the most of Japan’s 47 prefectures.

The team has halted practices since Feb. 29 after the Hokkaido governor urged residents not to go out in an emergency measure.